To stand with Native American people in their struggle for self-determination, AFSC chose first and foremost to be present and listen. We quickly saw that Native people were struggling not just for equality, but for sovereignty, and our support opened the way for other faith-based groups to endorse this goal.

During the fishing rights battles in the Pacific Northwest in 1960s and 70s, AFSC published the book “Uncommon Controversy,” which championed Native respect for the environment and helped shift public opinion in favor of Native rights. We also supported the Plains Tribes when strip-mining threatened their land. Through the work of Wayne Newell—a Passamaquoddy activist and educator—we backed the land-claims of the Wabanaki in Maine. During the early 90s, our work grew to include partnerships with the Mohawk and the Sioux Nations. Often, we assist Native communities in their efforts to serve their youth by keeping languages alive, renewing rites of passage, and reclaiming pride in their heritage.

Debka Colson
,
US
I was a Staff Member 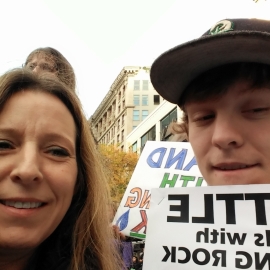 Toni Ann Mills
,
US
I am an Activist