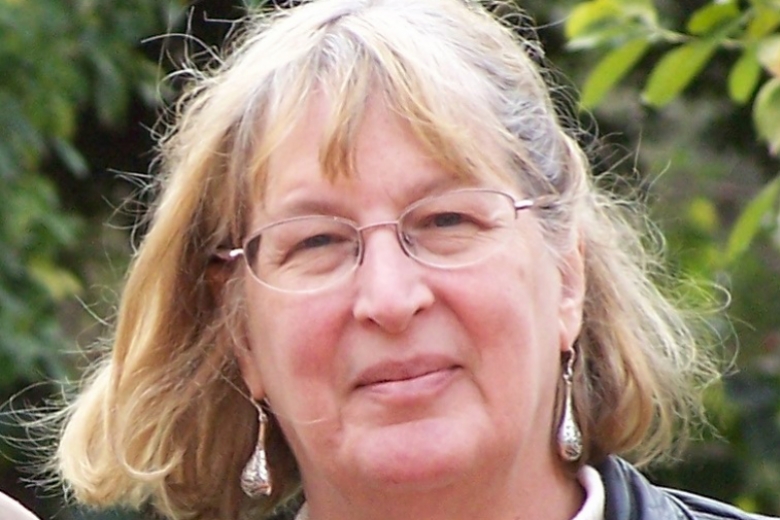 I was a Staff Member
Linda Lotz

On August 2, 1990, Iraq invaded Kuwait. In the following months, peace activists in the Jewish, Christian and Muslim communities of Los Angeles, CA, came together to see what we could do to counter the gathering winds of war. I represented the AFSC regional office in Pasadena. Throughout the fall and winter, we held peace vigils in communities across LA County, making it possible for many more to take part than if we'd held one large rally. (As happened across the country, our public witness was largely ignored by the press who wanted one big event to cover.)

One of those vigils was held weekly in downtown Pasadena, bringing together Friends and AFSC volunteers as well as members of the All Saints Episcopal Church, the Unitarian Universalists, and a local mosque. Holding large signs with our messages of peace, we maintained a silent witness as people drove by on their way home after work. It took some of our fellow vigilers a bit of time to feel comfortable with this approach but in the end, most adopted it with enthusiasm as they saw how our silence reduced the shouting back and forth with people in passing cars.

Across the country, countless people worked hard to prevent the impending war. We heard that constituents’ phone calls were flooding Congressional offices, expressing their objections to US military action. Ultimately, the massive opposition to the war could not overcome the image of babies being pulled away from incubators – a completely false story presented to Congress, created by a PR firm supporting efforts to restore the Kuwaiti government.

Former Secretary of State James Baker later revealed (The Politics of Diplomacy) that just days after the invasion of Kuwait, England’s Prime Minister, Margaret Thatcher and President George H. W. Bush agreed that Iraq's military capacity - built up during the long war with Iran - had to be destroyed. The late Michael Emery, who was part of the Middle East peace community in Los Angeles, shared a conversation with Jordan’s King Hussein: the US deliberately thwarted several Arab-brokered agreements which would have allowed Iraq to withdraw from Kuwait without outside military action. (See On the Front Lines)

On the fateful night of January 17, 1991, AFSC staff and volunteers gathered together around a large TV screen at AFSC and watched in horror as the bombing began.

Our interfaith peace coalition came together again, and we agreed it was important for us to pray together for peace. Our first interfaith service was held at the Islamic Center on Vermont Avenue in Los Angeles; it was packed with several hundred people, and covered by some of the local media.

Each Sunday evening, throughout “Desert Storm,” we rotated between churches, synagogues, and mosques. Every program was unique, but they all were rich and deep - and grounded our common belief in God and the power of prayer. We involved clergy and religious leaders, and we involved lay members as well. One night, we filled out cards with prayers for individuals and groups, and shared them in a manner reminiscent of the slips of paper placed in the Wailing Wall in Jerusalem. We heard recitations of scripture and traditional hymns presented by people with strong and beautiful voices. In a church, a group performed a dance. Being together with others of like mind was deeply comforting, and sustained us through the following week.

As the war came to a close, our last interfaith gathering was held at Leo Baeck Temple. By then, we had watched bombs blanket city after city. We had learned that bombs were deliberately dropped on Iraqi hospitals, water purification treatment plants and other civilian targets. We had heard Israeli fears of being bombed with chemical weapons, and by the few Iraqi SCUDs that successfully reached the Tel Aviv suburbs. We had seen photo images of “the Turkey Shoot” – the planes and bombs and smoke that filled the air as the Iraqi army withdrew from Kuwait. And, we had watched smoke from burning oil wells polluting the sky. When we came together that last time, we were thankful for the end to the violence, but subdued by the devastation.

As the program came to an end, the rabbi began talking with several young Muslim men. She brought out some very old scrolls of the Torah, from a vault at the front of the synagogue and explained what they said. They were engaged for some time, sharing, nodding, and smiling together. .

Throughout this process, we learned a lot about each other’s beliefs and traditions. In spite of differences in how our faith communities worshipped, we found many ways to share our belief in God and God’s mercy, and to unite in our prayers for peace. Coming together each Sunday gave us hope that people could solve problems through love, respect, and dialogue.

In time, a video showing the impact of the war in Iraq reached our contact at the Islamic Center. One especially poignant image showed a woman full of grief as she searched through the rubble of what had once been her home. Our peace coalition helped to distribute the video to the media and our respective communities. We felt it was important for Americans to see what the US bombing had accomplished.

Some months later, a recently-arrived Iraqi refugee watched the video in my living room over and over. It included a clip of injured people being rushed into the emergency room where he had been working throughout the war. His colleagues – and his former life - were pictured in our video!

No longer were the people of Iraq only to be seen through the eye of a smart bomb falling on a far-away country. Someone who survived the war was starting a new life in our community. The world had become a much, much smaller place, for me and for so many others.