Breaking down barriers inside AFSC and beyond

In the early 1970s, although AFSC had begun to diversify our staff, most people of color held support positions, not program or leadership roles. In 1971, a group of people of African-American, Asian, Latino, and Indigenous heritage formed the Third World Coalition (TWC) and brought their concerns to the AFSC Board. In response, the Board affirmed TWC’s mission with a mandate to incorporate the experiences and perspectives of people of color into the planning and execution of all Service Committee work.

This changed AFSC profoundly. Staff of color moved into new positions throughout the organization and challenged the status quo. Coalition members reviewed internal programs and initiatives, offering feedback and striving for greater inclusivity. In addition, the annual gatherings of the TWC created community and solidarity among staff of color from all levels of the organization.

Seeking to build connections across differences, TWC members also met with liberation advocates in the U.S. and internationally. Today the TWC lives on in a new incarnation, continuing to challenge structural racism inside and outside AFSC. 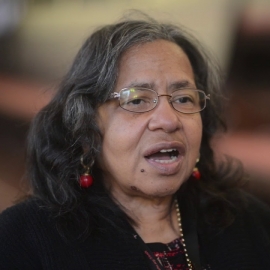 Paula Rhodes
Chapel Hill, NC
US
I was an Activist