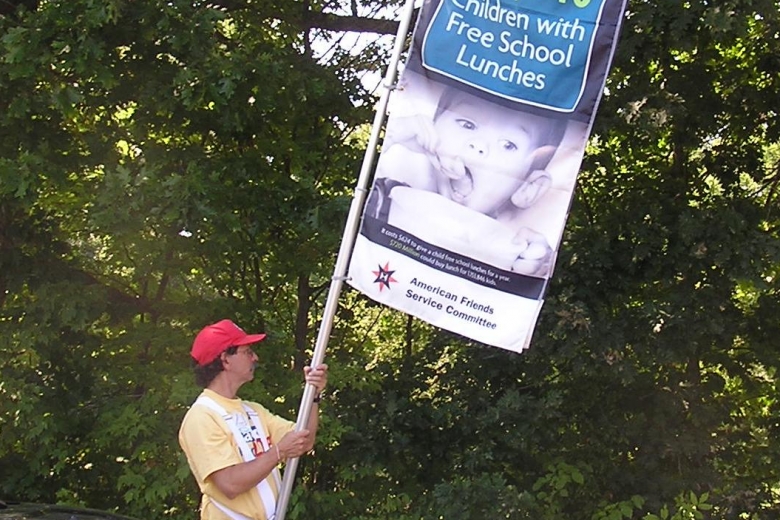 I am a Staff Member
Arnie Alpert

The tradition of the first-in-the-nation presidential primary gives the New Hampshire Program a unique opportunity to have an impact on national and even international issues. For me it started in 1983, when I was working to promote a nuclear weapons freeze and we involved former Vice President Walter Mondale in a door-to-door canvas in Concord. Since then I’ve spoken directly with candidates ranging from Rudy Giuliani to Senator Barack Obama, on a wide range of issues for AFSC.

One example that really stands out for me is the 2008 campaign about the financial cost of the Iraq war. AFSC had calculated that the war was costing the U.S. $720 million a day. That was enough to supply 1,153,846 children with free school lunches, provide four-year scholarships to 34,904 college students, or fit out 1,274,336 homes with renewable electricity. We put those statistics and others on dramatically-tall banners with powerful images of the good that was being sacrificed to pay for the war machine.

We had personal conversations with many of the major presidential candidates, and handed information to others. When Mitt Romney walked past our banners into the NH State House, my co-worker, Maggie Fogarty, handed a Cost of War brochure to his escort, U.S. Senator Judd Gregg, known for fiscal conservatism.

By the time the Democratic candidates met for their final debate two nights before the 2008 NH primary, we had displayed our banners at dozens of campaign events. And amazingly, during the debate, the cost of the Iraq war drew significant attention for the first time.

Governor Bill Richardson got it started, followed by Barack Obama, John Edwards and Richardson again. By March, Senators Barack Obama and Hillary Clinton were citing the trade-offs between government spending on the war and priorities such as health care and education.

Sometimes in the midst of a campaign we can get caught up in the logistics of organizing. It’s a good feeling to look back and see what a difference we’ve made.