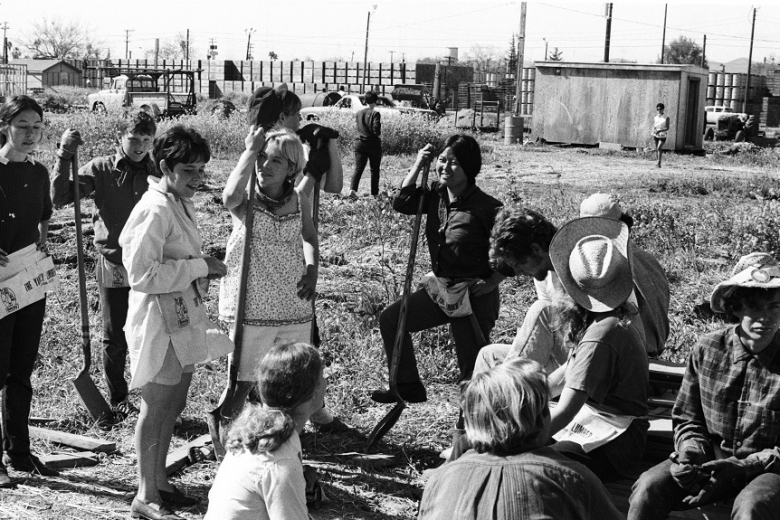 I was an Organizer
Isao Fujimoto

I joined the UCD faculty in the spring quarter of 1967, nearly a half century ago. My assignment was to start courses in Community Research and Action leading to a program in Community Development in the UCD College of Agriculture. I toured the Central Valley to get acquainted with activist community groups. Among those I met included the American Friends Service Committee(AFSC) and the United Farm workers(UFW) . I first learned of the AFSC through a Christmas gift. This was a sweater I received while a 9 year old imprisoned in the Heart Mountain, Wyoming concentration camp that confined people of Japanese descent during WWII. After service as a US Army Correspondent in Korea, I visited the AFSC office in San Francisco , I thanked the AFSC for the gift I got as a youth at Heart Mountain and offered to help. This was in 1958. I had started to teach chemistry at San Jose High SchooI so the AFSC started me with their High School committee. This was the start of a 50 year association that included my years at UCDavis and work with the CVP.

When I started at UCDavis, the AFSC office in Visalia was staffed by Chuck Gardinier and Herb Foster. Their focus on rural improvement issues involved working with farm worker struggles. They put me in touch with farm workers striking at Guimarra Vineyards in Delano. Shortly after I got back to Davis from Delano, I got a call from Pancho Boteho, UFW organizer in the Yuba City-Marysville area. Our conversation went like this:’

Pancho: We got a problem. Can you help us?
Me: What is the problem?
Pancho: The school board has cut off bus service to the migrant farm labor camp. Our kids have to walk along US Highway 99 to get to school. It’s very dangerous.
Me. I’m new here so I’ll need a couple of days to see what kind of resources we have. I’ll get back to you.

Davis at the time had no taxi or public bus system. But UCDavis had a couple of creative student leaders looking into starting a bus service for growing number of students spread all over Davis. After checking out local possibilities, they called across the Atlantic to London, England. An order was put in for a dozen used double decker London buses and a mechanic to get the buses tuned up. I called Bob Black, the student body president, told him about Pancho’s request and asked if any of the London buses could transport the children from the farm labor camp safely to school. Bob was very supportive and sent Bud Johnson, a newly hired bus driver. Bud was concerned about the tall bus avoiding low hanging wires and finding back roads away from fast moving highway traffic. He asked if someone could come along to assist him. Glen Burch, director of University Extension was an enthusiastic supporter of my starting the community courses and program. He saw its relevance to UCDavis training of Peace Corps volunteers for Nepal that was going on under his leadership. He reminded me “If there’s anything I can do to help you, let me know.” I realized the value of a teaching assistant as I was starting the courses on community so I asked Dr Burch for financial support to hire a graduate student to work with me. He hired Molly Freeman, a graduate student in sociology. I asked Molly if she would be willing to accompany and assist Bud Johnson. Molly responded with a very positive yes.

The red double decker London bus with its “Buckingham Palace” destination placard still intact, stood out on the roads of Sutter and Yuba counties. A local radio announcer invited Molly to his program for an interview. She mentioned responding to a request to transport children of farm worker families safely to school. What happened next was explosive. Growers in the area called UCDavis Chancellor Emil Mrak to complain. They asked “Why is a UCDavis affiliated bus helping out farm worker children?” To placate the complainers, Chancellor Mrak ordered Molly Freeman fired. Glen Burch reluctantly did so. But Molly did not go off quietly. She organized her friends who picketed the UCDavis administration building where Mrak had his office. Pickets carried signs stating "UCDavis needs to serve the needs of ALL rural Californians, not just select groups.” This sparked a debate and discussion on the priorities for the UCDavis College of Agriculture. Over 100 faculty, mostly from the College of Agriculture, gathered at Wyatt Pavilion to hear three speakers. Speakers included Professor Roy Bainer, chair of the department of Agricultural Engineering, Molly and me.

Bainer’s department’s most recent development was the mechanical tomato harvester. This was being put to use in the tomato fields near the Davis campus and was one of the subjects discussed. The merits of technological advances in agriculture were lauded. Molly and I agreed but added that it would also be informative and useful to evaluate the social and environmental impact of new technologies. As an example, the tomato harvester had a dramatic impact on the labor force. Besides reducing the number of pickers, sorters riding the harvesters became predominately women and were paid less than men. Also plant breeders were challenged to breed harder tomatoes to withstand the machines. The agriculture press covered the discussion and praised the advances made by the ag engineers. Molly and my comments about paying attention to impacts were considered negative and holding back progress. I got a letter from the director of ag extension in San Joaquin county that I was “ persona non grata and not to come to his area.”

This all happened within my first two years at UCDavis. I was off to a rousing, rocky start. I had come to UCDavis before I finished my dissertation at Cornell. With the added pressures and circumstances surrounding my work initiating the community development program, completing my dissertation got set aside.

In 1995, a year after I retired as UCD emeritus, I met with Mark Miller and Craig McGarvey. Mark had moved his office from San Francisco to Sacramento to oversee AFSC projects in the Central Valley. AFSC staff included Graciela Martinez and Pablo Espinoza in Visalia, Myrna Martinez in Fresno and Raj Ramaiya in Stockton. Craig recognized the importance of the James Irvine Foundation directing attention to the issues and struggles in the Central Valley that foundations had long neglected. Craig also proposed Irvine make a long-term commitment to work with Central Valley community groups for a decade. At their invitation, I joined Mark and Craig’s efforts in creating the Central Valley Partnership. Over a 10 year period, more than 20 activist groups banded together and supported nearly 150 emerging immigrant organizations in developing their potential. The CVP brought people from diverse backgrounds to collaborate and build together. The entire effort can be pictured as a Dynamc Mosaic. In fact, that’s the title of the dissertation on the CVP I wrote for my Cornell PhD awarded in 2010.

The friendships and experiences gained through my association with the CVP have been vital and life affirming. My heartfelt thanks to everyone I got to know and work with through the Central Valley Partnership for Citizenship