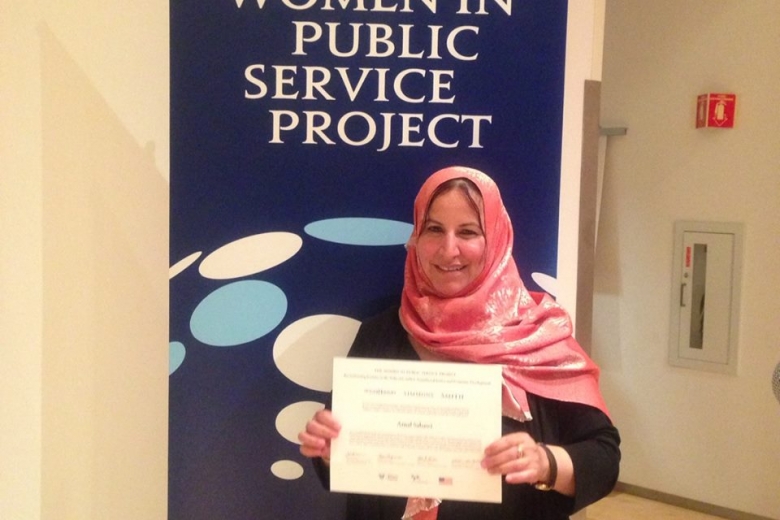 I was a Staff Member
Amal Sabawi

I am Amal Sabawi. I was AFSC's former program director in Gaza.

I lived a wonderful experience with AFSC for 16 years. I started out as a project coordinator in 2003 and became a program director shortly after. I managed to weave relationships, network, and target the youth sector, which was one of the most deprived sectors in Gaza.

AFSC was working on various projects before it embarked on the decade-long Palestine Youth Civic Engagement Program in 2004. These projects included the establishment of the first center for technical assistance for the visually impaired at the Islamic University. There were 30 students who benefited from this project and today there are at least 100. Another project was training architecture students on renovating buildings. This project turned into a leading organization: Iwan, the center for architectural heritage, which exists today as an independent organization in Gaza.

In 2004, the Palestine Youth Civic Engagement Program started, with merely four partner organizations. One year later, the program partnered with 30 organizations. The idea was to engage with young people through a training program and workshops based on the Popular Achievement (PA) model. The young people defined issues that affected the youth sector, developed community initiatives locally themselves, and found solutions, also on their own.

The last cycle of PYP was in 2014-2015. It focused on working with a generation that has gone through a lot, namely the political split of 2007, the blockade, etc. These conditions affected youth in an adverse manner. I call it the generation of solitude because it is a generation living in despair. They are completely deprived of any knowledge about Palestinian society, due to the blockade and the isolation. Their dream was to gain knowledge about Palestinians living in historic Palestine and the West Bank.

The Youth Civic Engagement Program succeeded in creating a safe haven for the youth of Gaza, where they discussed issues freely. In the beginning, some young people arrived in very sad conditions. They could hardly communicate due to lack of self-esteem or other issues. Later on, I saw a 360-degree transformation: The first meeting you would see them shy away from the discussion but after some time, you could feel their energy boost outwards. They were able to discuss issues, even meet with senior officials. In turn, this boosted the morale of the AFSC staff.

Working with youth had a positive return. It was an inspiring platform and had scope for creating unique initiatives. Many of the youth participants belonged to military associations and given that is nonviolent, it was a challenge to encourage youth to change their minds. Today, these participants are an example for others and this was one of the success stories of the program.

My dream was to open an academy to practice "a school of popular achievement"—to implement the ideas in a structured manner. Indeed, overall the PA worked with more than 70,000 students. AFSC was like a hub, a fertile ground or incubator for youth, before they went on to pursue their lives as adults. The academy would be the same.

I loved working with AFSC because of their refusal to discriminate among people, their transparency, honesty, and their own set of great values which impacted all of us here in one way or the other.
Amal is currently working as a freelance consultant in Gaza.