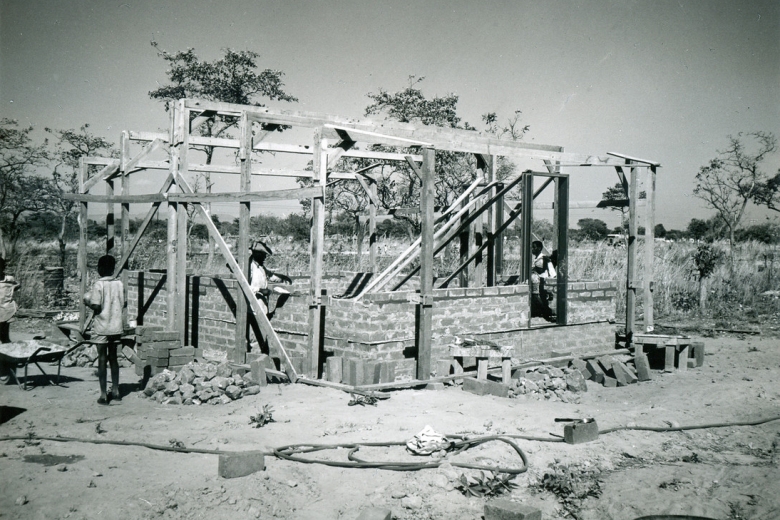 I was a Staff Member
Bard McAllister

As told by Bob Marshall

. . . My name is Bob Marshall and I wanted to talk about Bard McAllister. It seems to me that had he not come down here, maybe none of this could have happened. I got involved in the housing, Self-Help. Enter Bard, in the picture it didn’t show it, his beret, he always wore a red beret, he was a very dominant, very forceful person but very loving person.

When he went to Africa after being here for about 10 years, he went there carry out some of the same programs – housing, so forth-- they game him the name of Shining Mountain. They also had a drawing of that. He used that drawing in some of his wood carvings.

Bard, as stated, was asked to come by AFSC to come to the Central Valley to see what could be done to help farm workers. As stated, he felt he should first be a farm worker. He knew absolutely knew no Spanish. It took him a little while to get a job. There must have been a few kids who had a little schooling who could help him translate. The thing he would ask and response he would get would be a decent place to live.

You mentioned the coal mining fields in W. PA, I happened to be working on a project in W Philadelphia. He thought that might work with farm workers. He got a small foundation grant and helped initially 5-6 families in Goshen. Howard Washburn had read about this and started volunteering his time, help in this program of improving housing and later building new housing.

Soon, when Bard obtained this small foundation grant, he hired Howard Washburn to take charge of Self Help in Goshen. Meanwhile, the fed government, just after JFK was killed, President Johnson implemented the Anti-Poverty program. The folks that had a pretty good size of money in Washington that wanted to get out into the states, that could help people get out of poverty. Bard and a couple of others informed them of what was happening in Goshen. They sent 1-2 people out to look at it. They thought it was great and wanted them to write a proposal for a grant as big as they wanted to extend throughout CV. Bard and committee members put proposal together and brought back to DC. They received a fairly large grant to carry out.

. . . What I wanted to say was that none of the activity would have happened if Bard McAllister had not come down with great ideas and leadership.