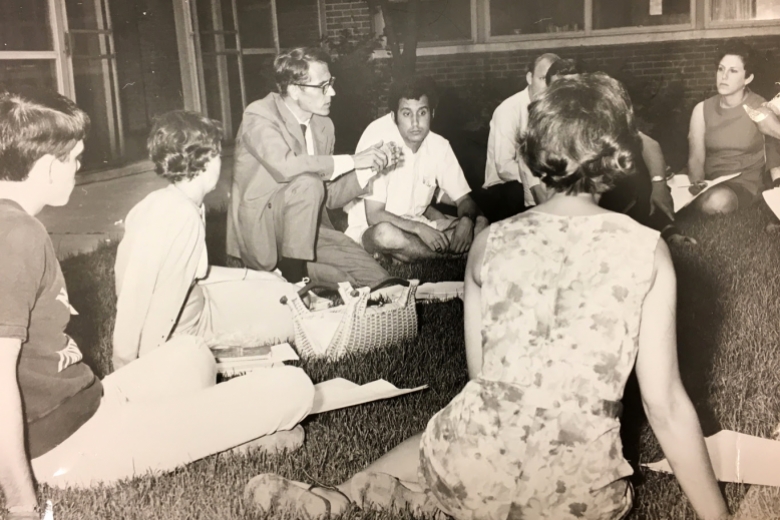 I was a Participant
Emily Kimball

I recently went through the mail I had put aside to read later, and came across your material about the 100th anniversary of AFSC. You were asking people who had been influenced by your programs over the years to share their stories with you. I am probably way too late but I felt compelled to let you know how much my attendance at your workcamps at home and abroad have influenced me and contributed to my life.

I met two best life-long friends while participating in AFSC workcamps. One in the slums of Washington, DC, which were located right behind the White House. Campers came from Norway, France, Spain, England and other countries to join Americans. We lived in a storefront with the glass painted white, and each day went out into the alleys to play with the children, and into the homes to work with the people on needed repairs. This was in the McCarthy era, and we were a bit afraid that the AFSC symbol painted on our whitewashed store front might be mistaken for the communist star! There I met Nancy Tenney who became my life-long friend. We roomed together in Grad School, and our families spent many happy times together. She has just died at the age of 86. I am about to turn 86 myself.

After my graduation from Northeastern University in1954 AFSC sent me to Wasmas, Belgium to participate in an International Service Civil summer work camp. You sent six Americans to join that camp, and I was one of the lucky ones. It was my first overseas trip. We were huddled in the bottom of the ship in the cheapest quarters, but we didn’t care. We were going to Europe to do good! Before sailing we went to Pendle Hill for orientation. In Belgium we lived in an old school house and busied ourselves planting trees and flowers to beautify this very drab mining town. Its celebrations were parades led by Catholic priests in black carrying huge crosses draped in black, followed by the mine workers, many of them suffering from lung disease––their families also dressed in black. The point of our camp was to demonstrate to the community that rather than jailing conscientious objectors they could instead use them to do good works in the community…illustrated by the beautification work we were doing. CO’s in Belgium were sent to jail if they refused to register for the draft, and kept there for a number of years; then let out and given a period in which to register. If they didn’t register they were put back in jail. This process went on until they turned 35. The leader of our camp was between jail terms and we were always worried that the gendarmes would come and take him away. That added a degree of excitement to the camp. We spent many hours in the homes of the miners speaking with them about our purpose in being there. In the end, the mayor of Wasmas dismissed us as Communists. However, having a good Quaker mindset we hoped that perhaps our message had gotten through to the many local folk we had spoken with about it.

Afterwards my new best friend, Susie Brown from California and I hitchhiked all over Europe together visiting many of the workcampers in their homes in Holland, France and Spain. This added to our appreciation of others cultures and ways of life. Franco was in charge of Spain, and when we visited our local friend from workcamp, we were fascinated that he listened intently when the radio signed off by playing Franco’s National Anthem. He was looking to see how many of the resisters living in his building immediately turned off their radios. Susie and I kept in touch for the rest of our lives. Our families visited occasionally, and in our later years, both single, we traveled together to Yellowstone, Lake Tahoe, and up and down Route One in California. Suzie just died last year. She was 81.

Another big AFSC experience was working at the NJ State Prison for Women for one of my 10-week co-op work periods from Northeastern University. You had another program a little different from the workcamp program and called with another name (Service in Institutions?) This was a very enlightening experience as this prison and its current director, Eda Mann were way ahead of the curve in prison reform. I will always remember that Ethel, a convicted murderer, in for life, was allowed to mow the lawn.

And oh yes, when I was in college in Boston, there were the weekend workcamps where we dispersed to work with Italian communities in the North End helping them with house repairs. In the evenings, we sat around darning socks and discussing important issues.

All of the above rich experiences fed into my strong interest in social justice and led me to pursue a Master’s degree in Sociology and African Studies at Boston University. After graduation, I took a job as a community organizer at United Neighbors Settlement House in South Philadelphia, and later I worked with the Philadelphia Commission on Human Relations to enforce the newly passed Fair Housing and Employment laws. Eventually I became a Quaker.

I can’t thank you enough for the opportunities you presented me to experience the world, and learn firsthand about injustices, and for showing me ways to work to overcome them.