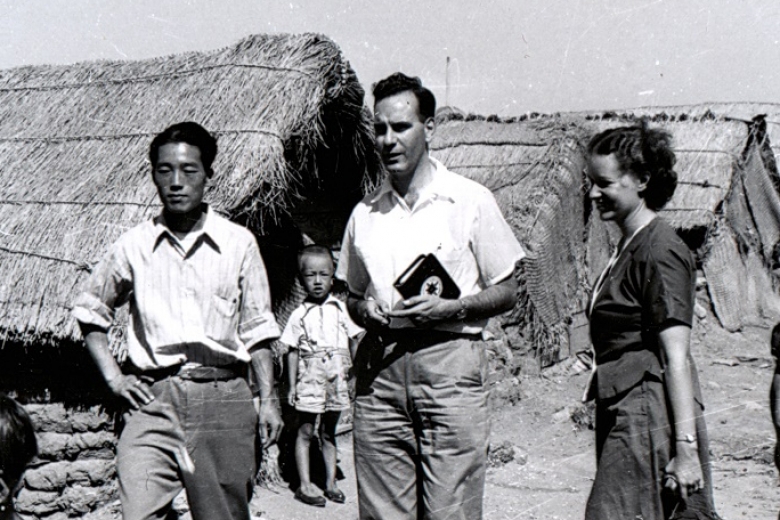 I was a Staff Member
Frank Hunt

Raised in a Catholic family, Frank came to know Quakers by playing cricket with a Friends youth club. When he was drafted at seventeen he registered as a C.O. much to the consternation of his family. He was assigned to the Friends Ambulance Unit as a paramedic and driver with the British invasion of Italy. At the end of the war, he stayed in Austria to work in a displaced persons camp helping Jewish survivors of concentration and forced labor camps get visas out of war-torn Europe. Many wanted to go to Palestine which was under British control but were refused.

This experience, plus his later work with the AFSC relief program for the refugees who had fled the Arab Israeli war to Gaza, gave Frank a unique perspective on the complex issues of the conflict – two peoples claiming the same land. In Gaza, he met refugees still wearing the key to their former homes around their necks. In Israel, he met holocaust survivors now welcome in a Jewish state.

True to the policy of working on both sides, AFSC opened a program in Israel and asked Frank to direct it. During his orientation in Philadelphia, he came to my office to talk about possible work camps there. I was immediately charmed by his British accent and invited him home to dinner. A year later, we were married in Media Meeting and returned to Israel together.

The Quaker neighborhood center in the old city of Acre and the agricultural development work in the Galilee focused on the needs of Arabs who had remained in their homes , about 15% of the population. With government support, I organized several work camps which succeeded in bringing Arab and Jewish Israeli volunteers together with other nationalities to help repair houses, playgrounds and other needed projects. After two years, experienced volunteers formed an Israeli work camp organization which continued after we left.

In 1953, across the world in Korea the bitter war between North and South Korea was ending. American and British Friends , with UN encouragement, decided to respond to the needs of thousands of refugees. AFSC asked Frank and me to go to South Korea. We landed in Pusan as the armistice was signed. After exploring several suggested projects, we chose Kunsan, where 33,000 north Korean widows and children were huddled in a make-shift camp and the only hospital had been bombed. With town officials, we agreed on two programs : refugee relief and reconstruction of the hospital. AFSC and British Quakers agreed to provide eighteen doctors, nurses and relief workers. The town government provided a Japanese style inn for housing and office.

Besides managing the household challenges, I helped develop self-help projects with refugee women , making bean curd (tofu), raising chickens and sewing Korean style garments for their families. Frank managed the hospital repairs and the medical team established a TB ward, trained local nurses, and treated critically ill patients. When our one year assignment ended, we returned to Philadelphia. The program ended as planned after five years.

Frank joined AFSC headquarters staff, taking on various assignments including administering refugee programs and assisting the director of the international division. Many challenges faced AFSC during the sixties and he supported staff coalitions and policy changes that resulted from the civil rights and the women’s movement.

In 1971-72 Frank and I served as International Affairs Representatives in Jerusalem along with our two children. It had been 18 years since we’d worked in Israel . AFSC had just published SEARCH FOR PEACE IN THE MIDDLE EAST. Frank traveled throughout Israel, the West Bank and the neighboring Arab capitals to meet with government officials and peace leaders to discuss the possibility of a secure Jewish state alongside of an independent Palestine. At that time, there was still hope for a peaceful solution. When we returned home, Frank continued to work for AFSC until his sudden death in June, 1973. He was 48 years old.

His early experiences with Friends were life changing . The training and experience he received as a conscientious objector set him upon a spiritual path that guided the rest of his life.