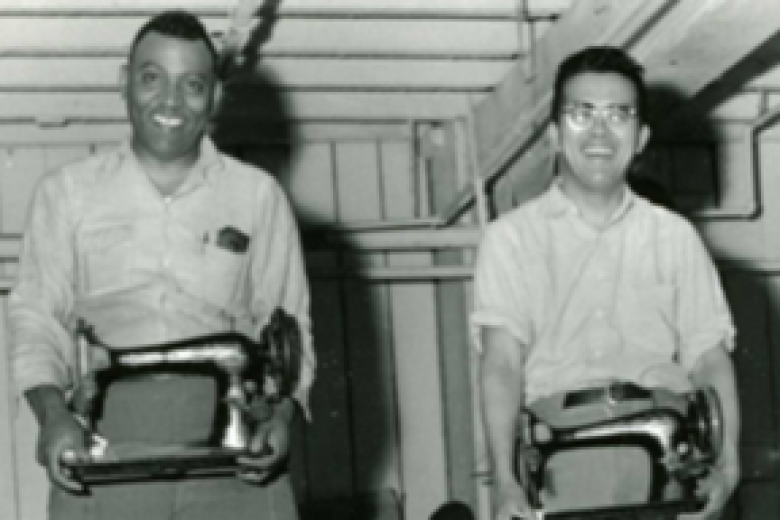 I am a Relative
Kenneth A Oye

In February 1942, Executive Order 9066 mandated removal of 120000 Japanese Americans from the West Coast. My father, George Oye, a citizen, was held in War Relocation Camps in Jerome, Arkansas and Gila, Arizona.

Quakers were among the few assisting detainees and monitoring conditions. The American Friends Service Committee (AFSC) provided baby clothing for George's newborn nephew. Herbert Nicholson shuttled between California and Gila with supplies. At Gila, George worked arranging housing for visitors. He was surprised when Esther Rhoads, a Quaker visiting from Philadelphia, asked to live under the same austere conditions as the detainees.

After the war, George decided to live by Quaker values, quietly helping others as his own family had been helped in their time of need. In July 1946, George was hired by the AFSC as a bookkeeper at $32 a month. He remained with the AFSC for the remainder of his career. From 1958-1980, he was Director of the Material Aids Program, supporting AFSC field teams at home and abroad. He arranged donations of medicine and prostheses, clothing and blankets, school supplies and sewing machines. George shipped relief supplies to refugees from many nations, including Angola, Palestine, Japan, Hungary, Algeria, and Vietnam.

In the photo, George and Robert Venters are preparing treadle sewing machines for shipment to Algerian refugees in North Africa. Their joy in their work is evident. I might add that AFSC staff were tolerant of the “help” my brother and I provided as children, as we sorted clothing at the Material Aids warehouse and loaded relief supplies into seats vacated by exhausted Hungarian refugees after landing at McGuire Air Force Base. George Oye retired as AFSC staff in 1980, but served in retirement as an AFSC Board member, Credit Union manager, and volunteer.

And today? I am a member of the AFSC International Programs Executive Committee and served on the Shared Security working group. George’s granddaughter, Mari Michener Oye, now serves on AFSC staff as Quaker International Affairs Representative in Asia and Country Representative for Myanmar.

While George managed material donations, shipping logistics and the national office, he also wrote poetry. In this year of the AFSC Centennial, one of his senryū poems comes to mind:
Nameless to nameless
The gentle hand of mercy
Reaches those in need
May all of us work with AFSC, gently and with mercy, to reach those in need.