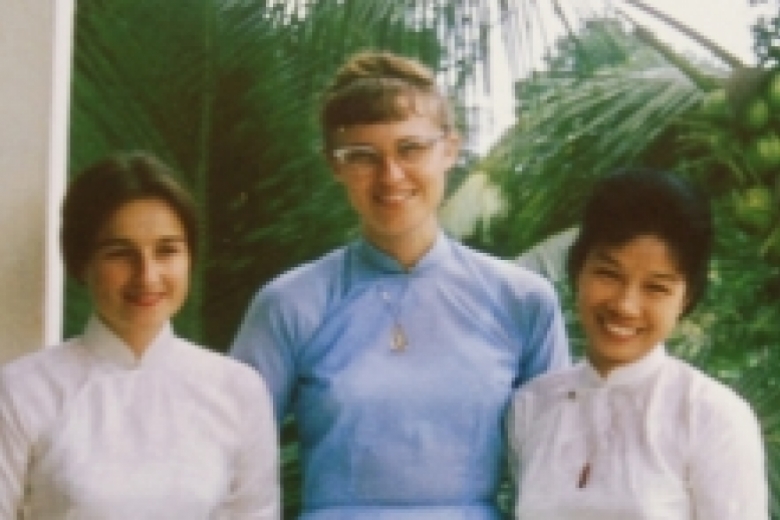 I was a Staff Member
Marjorie Nelson

When the Vietnam War broke out, I was 24 years old and living in Indianapolis, Indiana. I was studying at Indiana University’s School of Medicine to become a doctor. I grew up as a Quaker and was a conscientious objector. As I heard about the war, I wanted to find a way that I could help.

The American Friends Service Committee knew about my interest in serving overseas. And they contacted me and said, “Would you by any chance be willing to serve with a project we’re starting in Vietnam?” and I said, “That's an answer to prayer.” What AFSC told me is that they had two projects in Quang Ngai province, which is in central Vietnam. The first one was a rehab center, a rehabilitation center for war-injured civilians, and we would be training local Vietnamese how to, for example, make artificial limbs and braces so that when we were no longer there, there would be skilled people who could continue to do that service.
The other program that we had then was a pre-K school for refugee children who were living in refugee camps right around the city. Then later we had a program of my going to the provincial prison across the street where we did sick calls for prisoners.

A few months into my time in Vietnam, the director of the pre-school for refugee children invited me to come home with her to celebrate Tet, the Vietnamese New Year. Tet was coming up and patients were leaving the hospital if they possibly could. Everybody wanted to be home for Tet and our staff wanted to be home for Tet. It’s a big holiday. Xuan Lan (pictured to Marjorie's left) said to me one day, “Would you like to come to Hue to visit me and my family and to see Hue for Tet?” and I said, “Oh, I would love to do that!” So, I went up there I think the day before the first day of Tet and she said, “I’ve arranged for you to stay with Sandy Johnson who is an English teacher in the high school where my daughter studies.”

When we arrived in Hue I received a message that several cities nearby were being attacked and that Hue could be next. Sandy and I decided to hide out in the bomb shelter in her living room. While we were there, a group of Vietnamese soldiers invaded her house. Just then I heard a missile coming. We had heard a lot of missiles and this one was coming very close. So, I bolted and ran to get into the bomb shelter and a missile hit the roof of the living room. I said, “Sandy, Sandy are you OK?” “I'm fine,” she said. Sandy was really disgusted because those soldiers had not moved an inch. They just stood there and they were OK. So, then they went out, they didn't need a house with a hole in its roof! A couple days later other soldiers came back and said come with us and they took us to one of the headquarters houses. Ultimately, we were registered as prisoners of war.

Our prisoner camp wasn’t a typical prison. But it wasn’t pleasant, either. 35 Vietnamese prisoners were housed in a shelter built of palm leaves and bamboo. There were also 25 - 30 American POWs there who were housed in a similar shelter. They housed us with what I call a family. They were a group of people who were threshing rice for the guerrillas. What did we have to eat? Rice twice a day. There were bombing attacks so it wasn’t a picnic.

Sandy and I were released a couple of months later, on April 1st, 1968. Despite imprisonment, I was determined to complete my term. Before release, they asked us, “If we release you do you promise to go home?” Well, yes, of course. We want to see our family and let them know that we’re okay. They never asked us, do you promise not to come back? So, after three months in the states with my family and testifying before Congress and so forth and so on, I went back to Quang Ngai to finish my two-year term. Many people were so excited to see me!