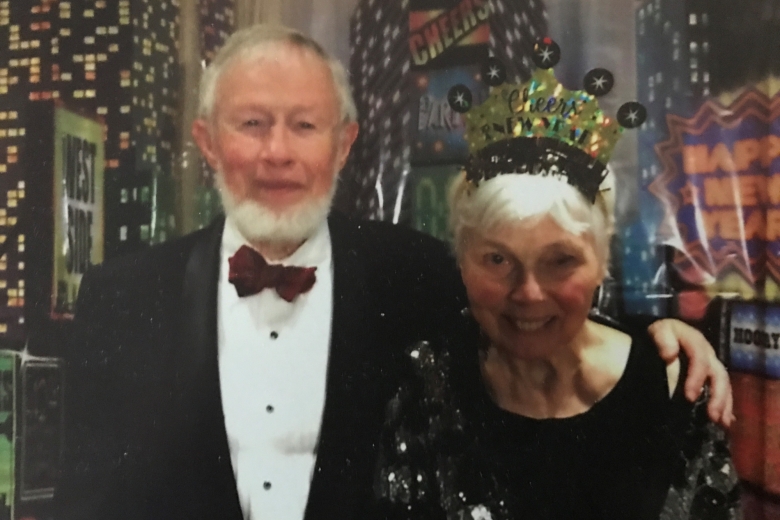 I am a Supporter
Bob and Susie Fetter

We are supporters of the American Friends Service Committee, and have been for many years.

Bob: I grew up in a nominally Quaker house. My Mother was a Christian Scientist but during WWII gas rations meant we couldn’t travel as far so I attended Radnor Meeting for one year. Dorothy Steere, my First Day School teacher, held up the AFSC star. The lesson about what that star represents is a lesson I have never forgotten.

I went to Swarthmore for college and I was an irregular Meeting attender. When I went to Harvard for graduate school I went to Meeting a bit more often, but when I arrived in Baltimore to work with the B&O Railroad in 1957 I showed up at Stony Run Meeting and had the feeling of finding my family. I took Susie to Meeting before we were even engaged.

Susie: I have known AFSC ever since I became a Quaker in 1962. I have known from the start that I could count on AFSC to respond to important issues. It was part of the reason that I realized I was born Quaker, even though I didn’t become Quaker until later.

Bob: I had family members, like my Great Aunt Olive Whitson, who worked for the Service Committee. Aunt Olive worked at Powell House, a place for refugees in New York. We would always hear about the work of AFSC through friends and family even before we were more formally involved.

Susie: We have both served on AFSC committees. I am a former Middle Atlantic Region Executive Committee member. I found, while I was on the committee, that the concerns of the AFSC were similar to the concerns of the Plowshare Peace and Justice Center in Roanoke – which resonated with my values.

Susie and Bob: We love the work of the Service Committee. From past international relief work, to local work here in Baltimore, it is all helping to address serious problems in the world. AFSC is too small to do everything, but Friends, with the support of sympathetic people, can set a good example. We can show the way forward.

Bob: I participated in an AFSC-led workshop during the 2016 Friends General Conference Gathering in Minnesota. During those five days last July our workshop group developed a draft for “Contemporary Quaker Narrative on War and Peace” – in great contrast with the dominant public narrative. We had deep conversations and it was a very significant moment for the fifteen Friends who participated. The workshop bookends with my circa 1942 First Day School lesson with Dorothy Steere at Radnor Meeting. The AFSC star represents shared Quaker values and a common commitment to service – a desire to work towards a better, more peaceful world.