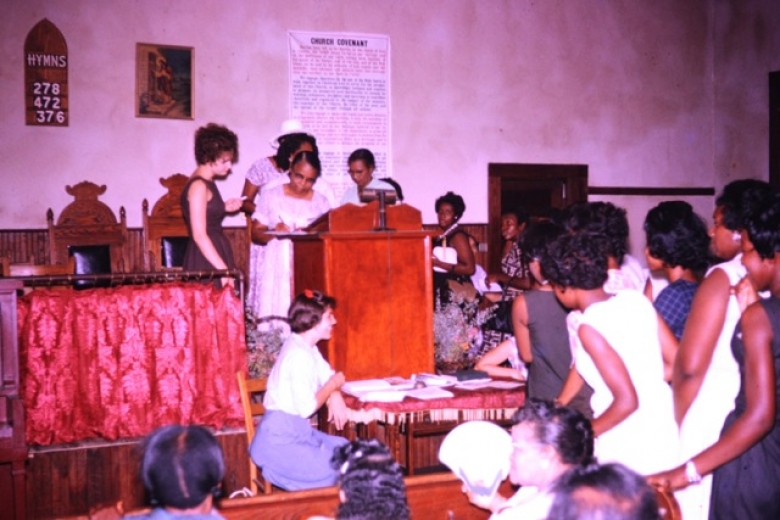 I was an Organizer
Congresswoman Eva M. Clayton (ret.)

In 1962, married to Attorney Theaoseus Clayton (TT) with two children, we moved to rural Warren County, North Carolina, where the majority of the population were Black. TT had been invited to the county by a white attorney to form a partnership, the first integrated law firm in North Carolina. We became engaged with the community and recognized that voter registration was very low and civic engagement very limited among Blacks. The year of 1963, I invited AFSC to consider sending a youth group to help leaders in Warren and Franklin Counties motivate and educate citizens about the importance of voting and provide instructions on how to vote. We were pleased to serve as the sponsor of this AFSC youth group.

A group of 16 diverse integrated college students, including two leaders, came to rural Warren County to live and participate with citizens that summer. With great respect and expectation, they met with citizens at churches, community centers and parks; had great discussions, role playing, and invited speakers on the importance of voter registration. The students were well received in both counties by the Black communities. However, there were two incidents where white men gathered in front of their living quarters with Klan signs to threaten the students. Two of the three black students were from North Carolina; one left because her parents were concerned for her safety. On one occasion the students came to our home, which was not far from their living quarters, for their safety. The students were brave and resolute, no physical harm occurred, their leaders were reassuring and called the police.

The project was a success in spite of these incidents. Voter registration increased greatly in both counties. This was the beginning of political empowerment and citizen engagement for Blacks and Indians in these counties.

Many of these college students, now mature adults retired from various careers, came back to Warren County in 2013 to reflect on their engagement, to reunite with one another, to visit with the citizens, and to note and celebrate the progress made in these counties over the past/last 50 years.
Again, it was my privilege to invited and serve as a sponsor.