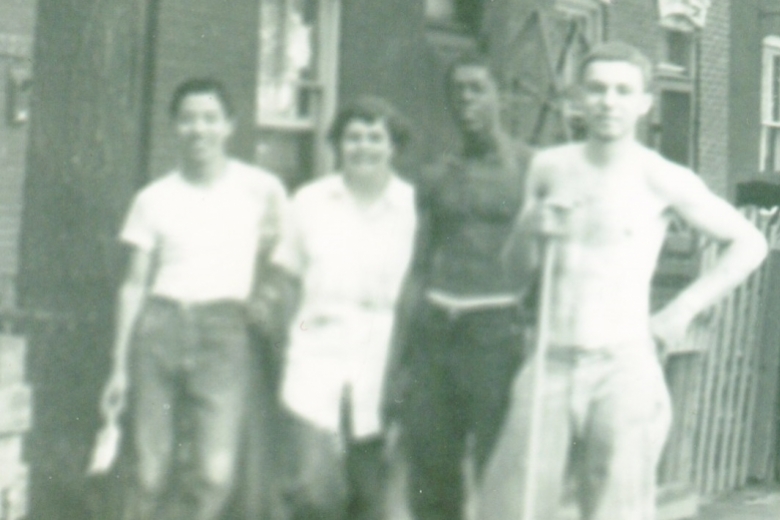 I was a Volunteer
Barbara Stacy Greenler

In 1953, my mother, Barbara Stacy (later Greenler), went to Washington DC to be part of an AFSC work camp. The stories I can relate are not orderly, but snippets of family lore and of childhood recollection combined. The work camp’s ostensible purpose was home repair: painting, replacing windows, patching walls. But the part that most attracted my mother, and was probably its most important aspect, was that its participants were a mixed race/mixed gender group. This was a radical proposition for a southern city in those Jim Crow days.

The capitol of the country, she told me, was split: the impressive buildings of the government with their landscaped lawns, the workplaces for well-to-do and middle class whites who lived in the suburbs, were surrounded by a city that was poor, black, segregated, and kept that shining city going. I remember her telling about a baby in one of the families with whom she’d been working who had been bitten by a rat, “Some of those rats were as big as cats!” she said. The infrastructure of black Washington DC was plagued by some of the same problems we see today, absentee landlords, housing fallen into disrepair, unemployment, insufficient infrastructure, and racism. On top of that, I understood, the poor people living in D.C. didn’t even have the right to vote in federal elections. They could clean the senate office building, but they couldn’t vote for a senator of their own. (It’s worth noting that today, although D.C. residents can vote in presidential elections, they still have no representation in the Senate and only a non-voting representative in the House.)

I remember the stories, if not the names, of the people in her work camp. They came from all over the world. They were black and white, they worked together, cooked and ate together, discussed politics, and sang. At one point, a visitor came to the work camp and stopped short, staring at one of the campers. “I lived for two weeks under your parents’ desk!” said the visitor. In a tearful reunion, the visitor explained that he had been one of the Jewish refugees whom this work camper’s parents had hidden in the Netherlands during World War II.

The most prominent story of that summer became a touchstone of my childhood. One evening, there was a substitute policeman in the neighborhood. (Later my mother had learned that the regular officer had told him to “go easy on the work camp kids, they mean no trouble.”) But when my mother and her friends went out walking in a mixed race, mixed gender group, singing, “We are climbing Jacob’s Ladder,” they were arrested by the policeman on duty for “disturbing the peace.” (As children, we relished this irony, for we understood just what kind of “peace” was being “disturbed”!) Nonetheless, they were taken to jail, where my mother and the other woman of the group refused to accept a segregated cell, and sang the night away with the black women who were incarcerated there. By morning, however, they were worn down and brought to shame and accepted a fine, which they paid. The three men, she told me, didn’t accept the fine and their case was dismissed. The lessons of this story were many, varied, and carried my siblings and me into adulthood.

The work camp experience was a galvanizing experience for my mother, sealing her life-long commitment to progressive politics and to AFSC. My parents were active in the open housing struggles in Milwaukee, participating in many of the civil rights marches of the late 1950’s and early 1960’s. She worked with the League of Women Voters to extend the franchise to DC residents, and looked for opportunities to cross the racial divide throughout her life. Even though she has been gone for ten years, my mother’s grandchildren can still tell many of the stories, carrying those lessons of equality, integrity, the power of song, and fortitude forward to yet another generation.