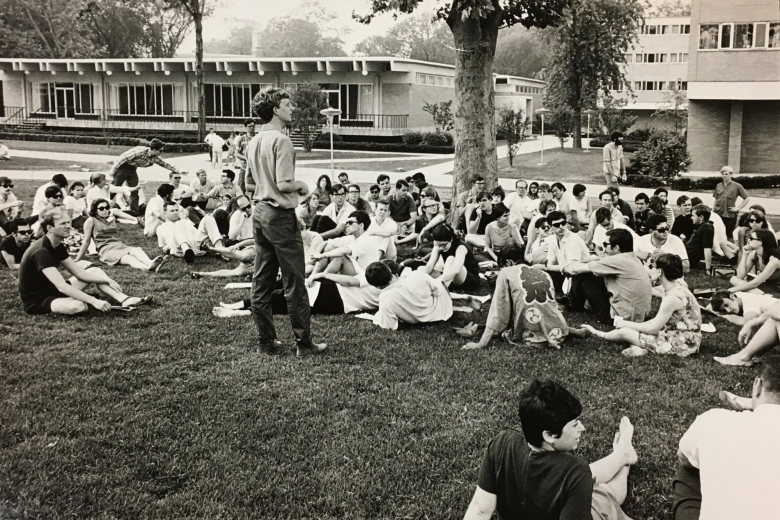 I was a Participant
Jeff Jaffe

It was a heavy time. A lot of my friends had gone into the army right out of high school and they didn’t come back. My peers were not pacifists but we saw no purpose in the Vietnam War. We wanted no part in it. We felt disenfranchised, we had no voice in what was happening because no one was listening to us.

Tony Avirgan was a friend from high school and Judy Chomsky lived in my neighborhood – they were both actively resisting the Vietnam War and got me involved. I started in 1966 and by 1967 I was radicalized. During Vietnam Summer, we would go daily to the AFSC office.

It was a time of empowerment with demonstrations every week. We had a clear purpose: end the draft and end the war. That clarity was liberating. We were always getting locked up so we were on a first name basis with a lot of the police officers but we believed in our purpose and we got inspiration from the community – they supported us.

I had friends who joined the national guard to try to beat the draft. But we were not about beating the draft – we were trying to change society. That’s where a lot of people got it wrong. They thought we were afraid. They thought we were dodging our responsibility. Everyone should be afraid of war, but that was not the point. We believed that the war and the draft were evil and someone had to stand up against evil.

I remember getting beat up by the police. I would go limp and instead of the police officer picking me up and throwing me into the paddy wagon they would kick us five for six times before they would throw us into the wagon. So you had to really believe in what you were doing, and we believed.

We changed America. From the anti-war movement to the women’s liberation work – it was an awakening. It still ebbs and flows but people of my generation learned how to make a difference. They learned how to do more than just go along. My anti-war work changed my entire lifestyle. I would have been a doctor or a lawyer. Instead I traveled, and took a lot of different paths.

Today, my generation is coming out again to protest. We learned that you must bring everyone together under one agenda. Our agenda was the draft. Today, people are worried about the environment, health care, civil rights. But if you are going to get enough people active the fight must be personal and universal. What will bring everyone together today to fight the money and lies?