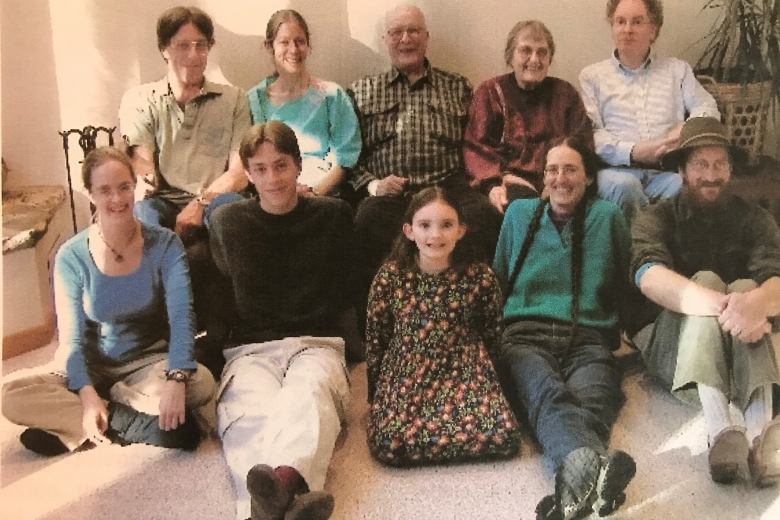 I was a Volunteer
John Michener

You could say that I have known the American Friends Service Committee forever. My mother, Anna Jane Michener, was a peace activist ever since World War One. In 1929, she visited Europe for an international conference organized by London Friends. The conference led to the organization of the Friends World Committee. It was a turning point in her life, and so in turn influenced my life. She dedicated herself to bettering human relations between racial, religious and ethnic groups. She was active on the AFSC Dayton, Ohio regional executive committee and with the AFSC International Institutes held yearly at Friends University, a block from our home in Wichita, Kansas. Many individuals from around the world stayed with us and over the years nearly fifty signed our guest book.

My mother was fearless and determined. Passionately holding with the Quaker belief that there is that of the Divine in every person. She approached everyone as an equal. When she died, the AFSC board had a moment of silence to honor all of her hard work.

I registered as a Conscientious Objector during World War Two and joined the Civilian Public Service Program during my freshman year at the University of Kansas. The program called for COs to be assigned to work camps in soil conservation or forestry projects, with the idea that they could volunteer for other programs.

I was assigned to Trenson, North Dakota, and worked some on the land reclamation project there, but I was primarily in the kitchen. When they closed Trenton I went to the Gatlinburg, Tennessee, camp in the Smoky Mountains National Park. I started off on the trail crew maintaining park trails, but then they stuck me in the kitchen again. Someone seemed to think I knew how to cook! I had 28 months in CPS camps run by the American Friends Service Committee.

In 1945, I married Ann Crabtree. She and I continued together as civil rights activists. She and I went with my sister to participate in a Congress on Racial Equity (CORE) sit-in at the University of Kansas in 1946.

The following year I was awarded a teaching assistantship at the University of California, Berkley. Ann got a job in the University's education department. Toward the end of our first year at Berkeley the State Legislature passed the Levering Act requiring all State employees to sign an oath affirming not only loyalty to the state constitution, but a denial of membership or belief in organizations (including communist ones) advocating overthrow of the United States Government. The Act also included a provision that the employee would accept without reservation any civil defense duties that might be assigned to them in the future. Ann and I could not make such a promise. Many faculty and employees refused to sign the oath, including Ann and me. But we were also making a protest against its rampart McCarthyism.

Looking back there were so many times when we made choices that completely changed the direction of our lives – it happened over and over again. On January 1, 1950, the pay of all non-signers was cut off, but I continued as an unpaid teaching assistant until the fall term terminated at the end of January. But we had to find employment so I took a job with the Social Security Administration – first in Sacramento and then at the headquarters in Baltimore.

At one point I became one of two vice-chairs of the AFSC board. During the Iran hostage crisis Iran invited the AFSC to send an observer to its 1980 “Crimes of America” trial. There was no time to make a conference call of the board so the board chair and we two vice-chairs decided to send an observer. Learning of this the Justice Department warned the three of us individually that the Logan Act made it a crime for American citizens to intervene, directly or indirectly, in an effort to influence a foreign government in any dispute with the United States. If we sent the invited observer we could face imprisonment. The state Department, however, said it would be invaluable to the US to get an unbiased report and urged us to send an observer. We sent one and were not prosecuted.

Every experience I had with the Service committee was a good experience. I have so many happy memories! You could say I had a good Quaker background and that the American Friends Service Committee allowed me to expand on that background and continue the work that my mother had started in the 1930s; improving relations between racial and ethnic groups and recognizing the Divine in every person.