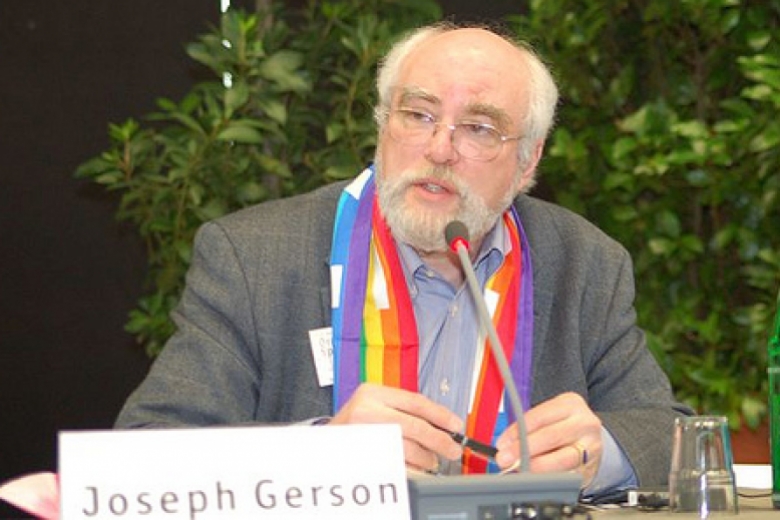 I am an Organizer
Joseph Gerson

History teaches us that it takes more than having the best idea to win life-affirming policies. It usually requires the marriage of a timely idea, organizing and mobilization. This is certainly a lesson I learned when--with my New England AFSC colleagues--we lit the fire that became the Nuclear Weapons Freeze movement between 1979 and 1982. That campaign also laid the foundations for my work in preventing the transformation of Boston Harbor into a nuclear weapons base, organizing conferences, and writing three books on the “Deadly Connection” between nuclear weapons and military interventions, and three decades of collaboration with Hibakusha (A- & H-Bomb survivors,) as well as with the Japanese and other international peace and disarmament movements.

At the height of the Cold War, with roughly 30,000 nuclear weapons already in their arsenals, the U.S. and U.S.S.R were moving deploy a new generation of first-strike nuclear weapons popularly known as “Euromissiles.” The U.S. Pershing II’s could destroy Moscow and “decapitate” the Soviet Union’s command and control systems in eight minutes, from launch to apocalypse. And its nuclear-armed cruise missiles were designed to destroy any surviving Soviet retaliatory second-strike weapons. At the same time, Moscow was moving to deploy missiles that could annihilate Europe in an equally short time. In those days, we didn’t know about “nuclear winter” and the reality that the victims of such a war would be all of humanity and most life as we know it.

The timely and elegant idea, a “Call to Halt the Nuclear Arms Race,” was developed in 1979 through discussions and debate in the MIT-based Boston Study Group. Its members included the Manhattan Project veterans Philip and Phyllis Morrison, Paul Walker, George Sommaripa, Martin Moore-Ede and the Call’s principle author, Randall Forsberg. Their idea was simple: Prevent the deployment of the Euromissiles by negotiating a U.S.-Soviet agreement to halt the nuclear arms race. While not completely eliminating the danger of nuclear annihilation, this call for a “Freeze” carried the appeal of being seemingly fair and the promise of survival at a time when the Bulletin of the Atomic Scientists’ Doomsday Clock was set at seven minutes to midnight.

The American Friends Service Committee, the Fellowship of Reconciliation and several other organizations quickly signed onto the Call, but what commitments and actions would AFSC take to make it operational? At a meeting of AFSC New England’s peace staff we had a deep and soul-searching discussion about if and how we should support the Freeze. It was not a call for nuclear weapons abolition and would not eliminate the dangers of nuclear war. But, despite its ambiguities, we eventually concluded that it was an important first step that we should support.

Frances Crowe of our Western Massachusetts office was, not surprisingly, first out of the box. She joined forces with Randy Kehler, who had experience in organizing referenda opposing the construction of nuclear power plants, to put the Freeze on the 1980 election ballots in several state senate districts. The referendum won in each of the districts, even those that voted for Reagan in the presidential election.

With Reagan and his bellicose “B Team” of Cold Warriors taking power, fears of nuclear war became palpable. In addition to massively increasing spending for nuclear weapons, there was the Reagan administration’s chilling rhetoric. As one official put it, “with enough shovels” we could win a nuclear war.

With the Freeze, we were able to touch and address the exposed nerve of widespread fear. At a meeting of New England AFSC’s Peace Committee, comprised of staff and committee members from across the region, Vermont Program Coordinator David McCauley took the floor with a newsprint chart that he and the Vermont Program Committee had created. Using the Western Massachusetts victories as his model, he explained that with an organizing campaign that included a walk from Washington to Moscow, Vermont (two small crossroads) they would take the Freeze to town meetings – the mythic foundation of U.S. democracy - in the winter and spring of 1981. Fifteen Vermont cities and towns, he pledged, would vote for the Freeze. He went on to promise that in 1982, 175 Vermont town meetings would back the Freeze!

David and the folks in Vermont did their homework. They led the public education work and garnered the signatures needed to get the Freeze on the town meeting warrants in 17 Vermont cities and towns in 1981. Come town meeting day, each of these communities issued their call for a halt in the nuclear arms race.

Outcomes of Vermont town meetings rarely make it into our major dailies, but these town meetings were an exception. A New York Times op ed article trumpeted the news of the Freeze victories across the country and around the world, encouraging others to take action.

David, of course, was wrong. In 1982, fueled by the organizing that he and his committee led, 177 Vermont town meetings voted for the Freeze. And they were not alone. The total across New England was 330 town meetings opting for the Freeze, in most cases with the organizing led by AFSC state program coordinators. And there was more, as voters in eight states prevailed in statewide Freeze referenda victories. The energy released by the Freeze movement fueled what became the largest peace demonstration in U.S. history, when a million people rallied in New York City on June 12, 1982 demanding disarmament and meeting other human needs.

In response to these victories, mirrored by equally large demonstrations across Europe and with Soviet President Gorbachev’s calls for nuclear disarmament, Senator Edward Kennedy and Representative Ed Markey of Massachusetts took up advocacy for the Freeze in Congress. Along with the little known 1983 Abel Archer war game miscalculation that brought us to the brink of nuclear holocaust, our victories forced Reagan to reverse course and to begin the nuclear disarmament diplomacy it had long resisted. It culminated in 1987 with the signing of the Intermediate Nuclear Forces Treaty prohibiting the deployment of the Euromissiles and functionally ended the Cold War two years before the fall of the Berlin Wall.