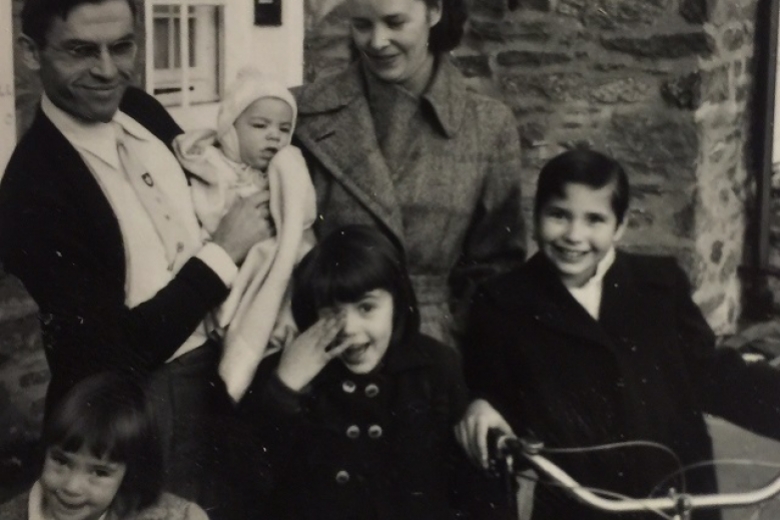 I am a Relative
Laurel Hoskins Quarton

1947 brought me to life, and brought death to many thousands of others in Shanghai, China.

In my reading, I am always struck by the suffering that went on in the time and place of my birth. My parents, Lewis and Lois Hoskins, never discussed the chaos or the brutality of the civil war they encountered there. They were members of the international Friends Ambulance Unit (FAU), an affiliate of the AFSC, and their focus was unfailing. They were there to bring medical and humanitarian relief to all sides of China's civil war, my father as a Conscientious Objector and my mother as his partner.

My parents' stories of their China time are filled with loving and durable relationships across nationalities and races. Their friendships amongst Chinese, Japanese and international FAU volunteers colored their (and my) entire life. The FAU was approved by both the Kuomintang and Mao Zedong and was permitted to cross dangerous political borders, forbidden to others. Because of their non-partisan and committed efforts to relieve war-time conditions, the FAU was permitted to remain in China after every other foreign group had been asked to leave. When my parents returned to China in later years they were welcomed and still beloved by Chinese friends and Friends, despite China's on-going navigation through the Cultural Revolution. Quakers were known to disarm and do no harm.

Although my older sister Terry remembers the bodies of children in the streets in 1946-48, and I was told (when I asked) that a grenade landed in my nursery, the stories of my parents are focused on the good that was done and the common humanity they experienced with the people they met, sometimes even at gunpoint. I learned from this family-memory that my parents were part of something beyond themselves which sustained, throughout their lives, their purpose and dedication to creating unification amongst people.

When my father went on to became Executive Secretary of the AFSC, I grew up a train ride away from AFSC's awe-inspiring (to me) and historic buildings in Philadelphia. This is where my tribal memory of Quakers started and was concurrently fostered by nine years of life at Pendle Hill. Much later my father told his children some stories of his work with the AFSC. One centered on meeting Dr. Martin Luther King, Jr. as a young, charismatic, yet little known southern Black preacher who became interested in Mahatma Gandhi and non-violent resistance. My father authorized AFSC funds on the spot to send MLK to India to delve into this more deeply, and MLK returned to take a powerful stand against the Vietnam War and against using violence as an agent of change. I know that my father was dedicated, during his time with the Philadelphia AFSC, to ending Apartheid at a time when it wasn't yet the popular cause it later became. Through this dedication the unprecedented, integrated convention of five hundred White and Black leaders was held to discuss race relations and cross cultural education in South Africa. I came to realize that he believed that healing human relations, at the most basic level of trust and respect amongst national, racial and cultural differences, was necessary to allow other peace-keeping efforts to succeed.

Although I was too young to be cognizant of his many directions and intentions while with the AFSC, I know that he accomplished what he did within the collective embrace of Quaker commitment to the goodness and Godliness of all people. I was born and raised in the heart of my parents' Quaker service and, as I grow older, I am referring more and more often to those seminal qualities which inform my thinking and actions. It provides a cushion which I value. The AFSC gave my father, and many others, the engine and the fuel to accomplish what, today, stand out as incremental miracles in this past century's challenging commission of history.