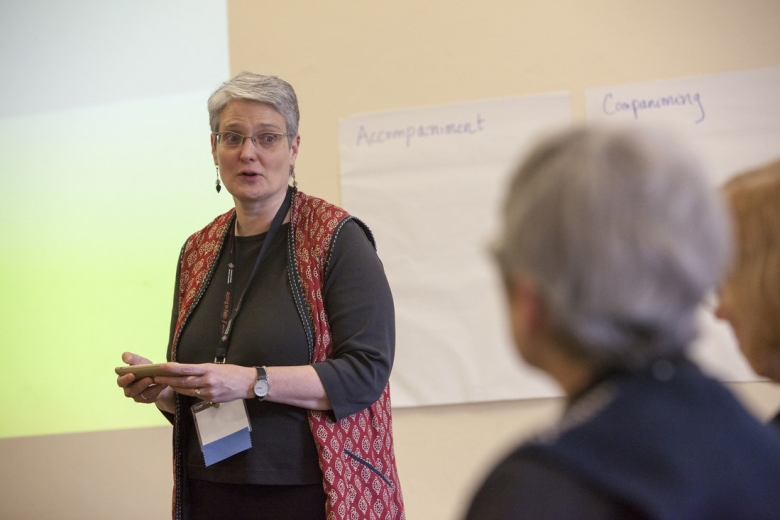 I am a Staff Member
Lucy Duncan

Dominque Stevenson, program director of AFSC's Friend of a Friend program, picked me up at the Baltimore train station and we drove the 90 minutes to Hagerstown, MD where I would accompany her into two prisons.

In heavy rain we arrived at the Maryland Correctional Training Center (MCTC) late in the afternoon and we walked up to the gates, chain link with endless concertina wire encircling the prison, and guard towers perched above us. Dominque has been working with the men at MCTC since 2006. The men themselves were instrumental in designing the program, establishing the focus on mentorship.

A guard escorted us into the locked and empty classroom building, and then he called for the men to join us there. One by one the men gathered in the room, all of them African American. It is clear that Dominque has had a long relationship with them and that they were excited to see her and one another.

It was time for the men to begin their dialogue. Dominque said, “The basis for this program, for all we do, is love, but we haven’t talked about love for a while and its time again.” She invited a man to read a poem she brought. Then she asked, “What do we mean by love?” As I listened to the men, I felt as though they were reciting Corinthians 13, but the words were their own and had been written on their hearts.

A tall, older man started, “Love can be defined as a noun or a verb. When you're in love, that feeling can fade, then what? Mature love is about what you do, how you act, the sacrifices you're willing to make.”

A younger man continued, “Love is a willingness to endure, tolerate those who are unpleasant, unkind, unforgiving. Love is patience, a willingness to withstand onslaught, stand on what you believe.”

One of the men said, “Love is a service. You do something for someone else.”

Across the room, an older man responded, “Love makes us vulnerable, to feel another's hurts.”

Another replied, “Sometimes love is letting go of someone, letting them make their own mistakes. I let you go, so you can learn yourself.”

Too soon the guard came and told us it was time to finish up. The men said a very warm “good-bye” to me, invited me to visit again. It felt so incongruous to me, to have such amazing spiritual energy locked up, hidden and almost inaccessible to those of us in the community. It's clear these men are sharing their wisdom in the prison, changing their world, mentoring younger men and ministering.