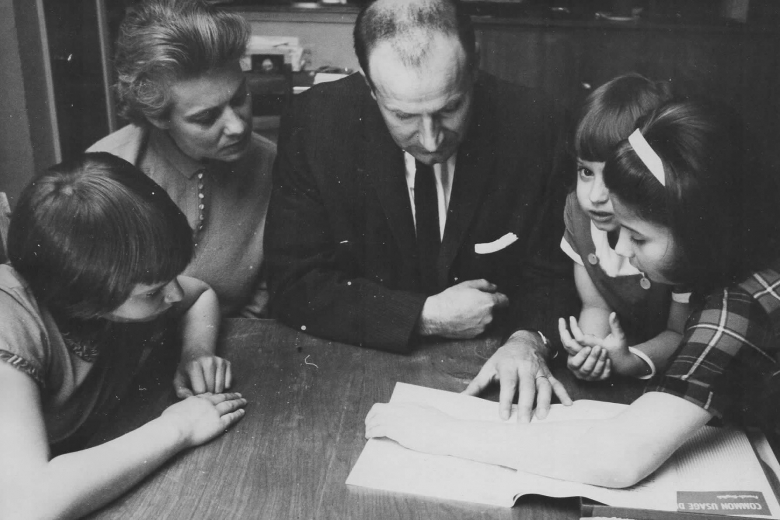 I am a Relative
Mallory Clark Waldman

Bronson Clark was a man who worked for social change all his life. He wrote stories for his four daughters about woodland animals who solved problems like evil witches & wolves by working together non-violently. I was born while he was in prison as a Conscientious Objector (CO) during WWll so my childhood was also filled with stories of his time in prison and of his formative college years at Antioch where he became a pacifist and active for social change. One of his college friends told me he was the only socialist on campus with a car.

Upon graduation, he and my mother, Eleanor Meanor Clark, set up a commune called Ahimsa (“to do no harm” in Hindu) with several other Antiochians and soon to be COs. The major focus of that time was studying alternatives to violence & integrating a local swimming pool. The group wrote a paper called "Aggressive Pacifism" describing actions that are now common in training for non-violence in the face of aggressive actions. The commune closed after Pearl Harbor when the members knew they would be drafted. Dad had to battle for his CO status when he found that his draft board never granted that status to anyone. He appealed & finally gained CO status in March 1942.

He refused to report to the Civilian Public Service (CPS) camp in NY because he believed the camps were "government labor camps" so he was promptly thrown in jail before being transferred to prison. He made his time in prison sound like a whirlwind of working with other COs for social change. Segregation within the prison, censorship, withholding mail, even topics of discussion were dealt with by hunger strikes & other actions until the COs were able to make changes within that system. I think he was finally paroled in May 1944 just so that they could get rid of him.

The war had ended with the atomic bombs dropped on Japan but he wanted to work with other COs in the AFSC and the British Friends Ambulance Unit in China. He was responsible for truck convoys carrying medical supplies all over Western China which was under control of the Nationalist Government.

That was enough work for a lifetime and yet it was only the beginning – he continued his actions for social change throughout his life including a variety of assignments with the AFSC. From 1968 to 1974, covering the years of growing US involvement in the Vietnam conflict, he served as Executive Secretary of AFSC.