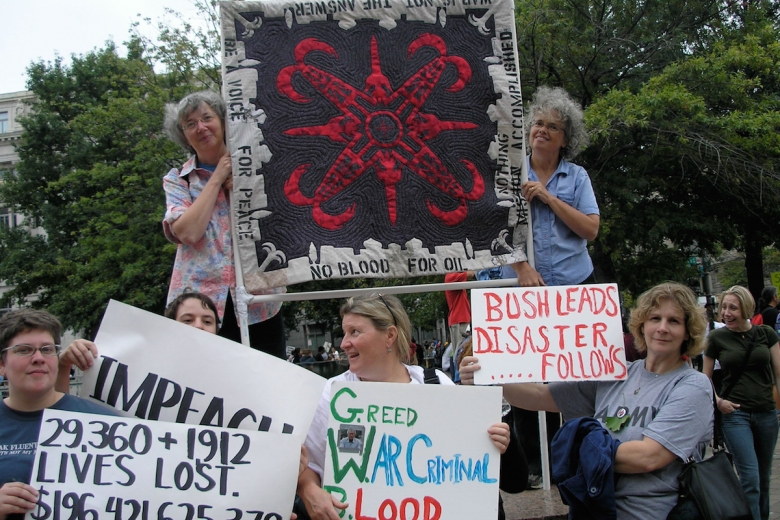 I am an Activist
Mary Gillis

I hadn’t participated in the peace movement much since protesting the Vietnam War in college days. One day in January 1991, during the evening rush hour, I saw a small group of people standing still among the crowd of commuters. One was holding a small sign that said ‘Quaker Peace Vigil.’ I immediately went over and stood with them that evening, and returned for the duration of that vigil. It amazed me how noticeable a group of people standing still and silent was, in the rush hour melee.

A day or so after 9/11, I called the local AFSC office to find out about any planned events. There turned out to be a pretty big demonstration in Copley Square the following Tuesday. A group of us decided to continue coming every Tuesday evening, which we have been doing continuously since 2001, in all but the bitterest cold. We are down to three or four regulars, especially one from Veterans for Peace and another from Pax Christi.

For about four years, 2005-2009, I stood at Downtown Crossing in Boston, in the Monday evening rush, holding a sign and handing out information for people to read on the way home. Initially I thought it would be scary to be on my own, but I found that people were much more likely to stop and talk. I spoke with people in the military or their family members who usually thanked me for being there. Some amazing conversations were with a female Korean War vet, a woman who had been a small child in Italy during WWII who said they lived in caves to escape the bombs, a former CIA analyst who was opposed to the Iraq invasion.

I have also been able to express anti-war sentiments in my quiltmaking. The ‘Missiles and Oil Wells’ quilt that I made in 2005 (pictured here) traveled to several galleries and to a massive protest march in Washington, DC. It now hangs in a charter high school in Boston. The ‘Shock & Awe’ quilt that I made, with all 4,486 names of American soldiers killed in Iraq printed on the fabric, as well as information about civilian casualties and displacement, has been acquired for display in the library of an affordable elderly housing community.