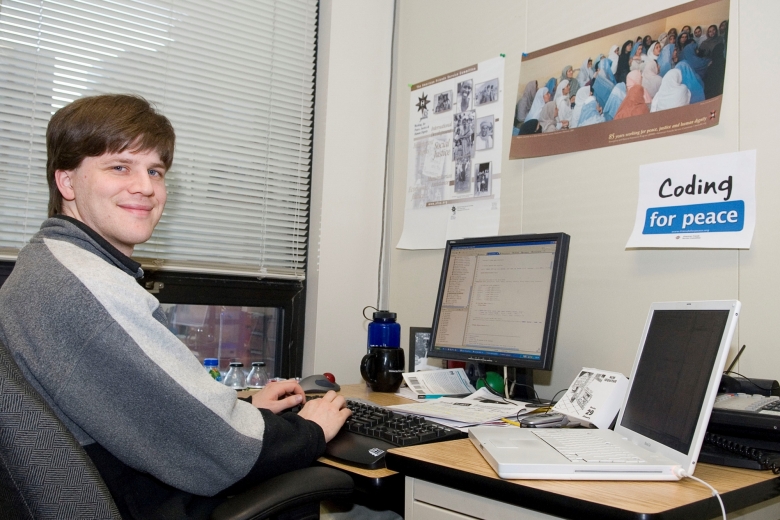 I was a Staff Member
Aaron Crosman

Having graduated from College in 2001 with a degree in Computer Science, Aaron Crosman was hired in 2002 by the AFSC to provide IT support. He soon found himself having conversations with staff in places like Chicago and San Francisco that started, “So, what did the screen look like before the computer went black.”

Aaron inherited support for the phone system in Friends Center in time to have responsibility for it during the Friends Center renovations. Because phones are at every workstation, Aaron found himself in most of the planning and implementation meetings around that renovation. Wires had to be installed in any wall being moved.

As individuals were moved around to accommodate the renovations their phone lines needed to be disconnected and reconnected with every work location shift. Phone and computer wiring is everywhere and so every planning and implementation session needed the presence of the telecommunications supervisor.

Over time, Aaron assumed responsibility for management of the AFSC web presence. This meant coordination with the development program. It also became his assignment to negotiate with the regional offices, historically jealously guarding their autonomy and independence, to integrate their web presence so that there was a consistent message, look and feel for AFSC web activity.

One of the events that he felt particularly successful with was support for the AFSC response to the Tsunami in South East Asia. Because the AFSC had on the ground personnel, they were in the position to respond with a network of well vetted partners in channeling aid to victims of that event.

Aaron persuaded his colleagues to put a front page donations link focused on that project, and within a week that link had brought in over $1,000,000 in new donations to support that effort. Aaron does admit that probably one of the reasons for that success was that a web search for responses to that event often resulted in an alphabetical list of agencies responding, and American Friends Service Committee came before American Red Cross on those lists.

In 2010 Aaron’s wife took a tenure track appointment in South Carolina which resulted in their move to Aiken, SC. He continued for a while working in Philadelphia from his living room in South Carolina, but eventually moved on to other employment. In 2016 much of the structure and organization, the look and feel of the AFSC web presence still reflects his work and leadership.