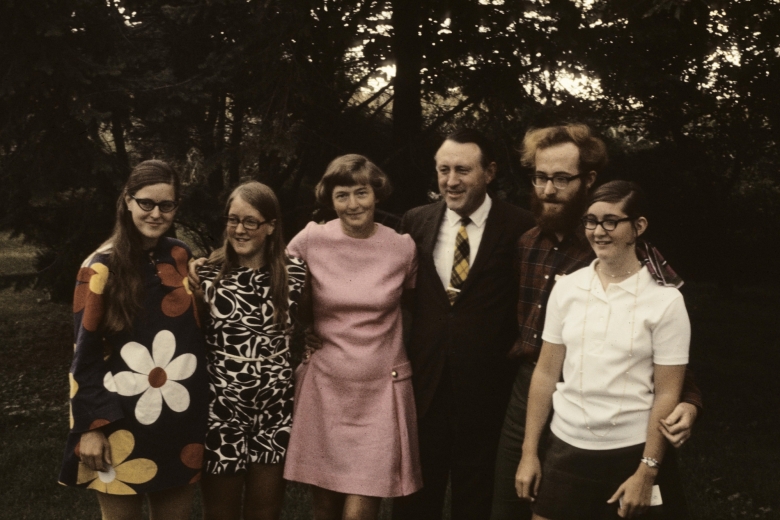 I was a Participant
Caroline Kerman

The Kerman Family and AFSC

The Kerman Family was interconnected with AFSC throughout the adult lives of the parents, Ralph Kerman and Cynthia Earl Kerman. Their 4 children Caroline, Ed, Jody and Nancy were involved in many of these adventures as well. This is Caroline Kerman Wildflower writing her memories, backed up by scrapbook entries in some cases. I may also submit a separate story about my personal involvement with AFSC.

In 1941, my mother, then Cynthia Earl, (later Cynthia Kerman) participated in an AFSC workcamp in Chicago, working at a settlement house. She participated in a Wade-In at a Lake Michigan beach with a person who later became a famous civil rights leader. This workcamp may well be what led our family to Quakerism. And I spent the 60's and beyond thinking that my parents hadn't ever done any civil disobedience. Somehow we didn't hear about this Wade-In until Mom was in her 80's... AFSC truly was working on changing the world Quaker-fashion from the beginning of our family's involvement with AFSC. My mother was committed to ending racism throughout her life.

We went to Family Camp a number of years Merrill-Palmer in Michigan in early years and later in Wisconsin and Kentucky. A week of activities for children and adults and singing songs with an international flavor together.

There was a week-long AFSC retreat held at Kalamazoo College and led by my parents and the Corys in about 1961—we kids from the 2 families were kind of at loose ends, so it must not have been a family camp.

1955/56 Treats to Share in Kalamazoo, Michigan. We were encouraged to collect items for AFSC Material Aid instead of asking for candy on Halloween. My parents and a few others in the Kalamazoo Friends Meeting made a movie about it which starred some of us children, and we also went on TV about it. On TV, my mother talked and interviewed my brother Ed, but then there wasn't time for me to say anything. I was disappointed about that! (We were probably 7 and 9 at the time.) I never heard much more about it, but learned in the scrapbooks my sister Nancy compiled that it was quite successful. More about that later. Eventually we moved to collecting money for UNICEF at Halloween.

Our family traveled to Lebanon for 1957-59. I was confused when told that that part of the world was called the “Middle East.” (Middle of what??) Anyhow, the term was probably coined by dominant culture White people. Now, some are calling it western Asia, which I found confusing until I remembered my 10-year-old confusion. The “Troubles” came up in 1958. There was friction over electing a new president, leading to civil war and the landing of the U.S. Marines. Most relief efforts were focused on the Christians, so AFSC sent food to the Moslems. Dad (Ralph Kerman) helped deliver the food (at some risk, I am sure). My parents arranged for some dolls with traditional costumes and a few other items to be sent to AFSC, so that AFSC could raise money to cover the cost of this food. What I learned from the scrapbooks was that my parents had been sending regular articles to the newspaper in Kalamazoo. This resulted in several tons of material aid being collected during Treats to Share and it was all earmarked for Lebanon. My parents also rightly pointed out that much of the difficulty in western Asia was based on oil. Many years later a friend was involved in helping AFSC clean out their Philadelphia basement in preparation for the major remodel of the building. He brought home some tiny boots with the name “Kerman” inside. We returned them to my sister Nancy, who had been 3 at the time they were sent to AFSC. I told this story about the food and the boots when we Corporation members had a half-hour opportunity to talk about AFSC at the Annual Session of North Pacific Yearly Meeting.

The Jacksons lived a block away from us in Lebanon and Gail Jackson and I became good friends. I didn't know until years later that Elmore Jackson was doing shuttle diplomacy between Egypt and Israel and brokered a major peace deal. This was also an AFSC project.

The Kalamazoo Meeting participated in another AFSC project by arranging for the education of 3 African American young people from Prince Edward County,VA who could not be educated there because all the public schools had been shut down, with private schools started for the White children. My friend Gail and I accompanied Adda to the bus station to welcome them and Adda Dilts followed their progress from then on. I posted Adda's story about this. The adults in the Meeting, including my parents, did a great deal of work to make this happen.

In 1962, my father Ralph Kerman decided that he needed to work more directly for peace. He saw his physics students going into the defense industry. So he resigned, halved his salary and started working for AFSC as the Michigan Area Secretary in Ann Arbor, Michigan. (He had taken his original professor job at half the salary he had been offered by Westinghouse.) He organized workcamps, had speaking engagements, organized draft counseling and much more. He went on to be the Middle Atlantic Region Secretary, which is how my parents ended up in Baltimore after I was an adult. He worked for AFSC until about 1978. There he oversaw AFSC work in the donut region all around Philadelphia. AFSC has been a thread in the Kerman family story thoughout Ralph and Cynthia Kerman's lives—and continues with my work with the AFSC Corporation. --Caroline Kerman Wildflower