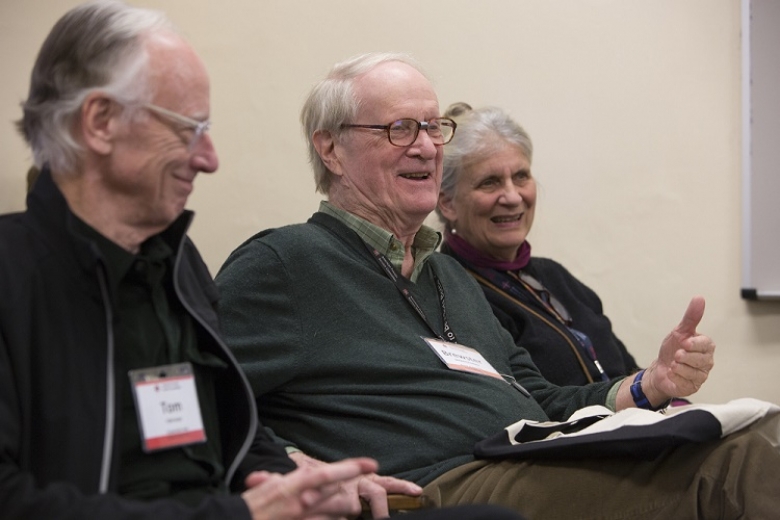 I was a Staff Member
Brewster Grace

I was the director of the Quaker United Nations office (QUNO) in Geneva from 1992-2005. One project I was very personally involved with is our work to amend existing World Trade Organization laws so that disaster stricken countries to be able to purchase generic life saving medicine without violating patent laws. Major drug exporters charge enormous fees for their products. At the time, the WTO Intellectual Property Rights Agreement copyright law meant that importing countries couldn’t produce generic substitutes to avoid huge prices. Patent laws such as this are part of the reason why pharmaceuticals are so popular on the black market. The Amendment we worked on would allow for countries with pandemic diseases such as HIV/AIDS to purchase generic drugs without being sued in the WTO in by major pharmaceutical companies.

African Quakers urged QUNO to lobby the WTO for an exemption to occur in cases of national emergency. We worked with Oxfam and Medicines Sans Frontier to make a case for amending the law. We worked with African trade negotiators in Geneva in order to get them up to speed on international patent law, as well as with major pharmaceutical companies to demonstrate the need for change. Our work finished in 2005 when the WTO agreed to the amendment. It allowed for developing countries not to produce, but import life saving generic medicine from countries like Brazil and India, at 90% less than the cost of patented products.

Another QUNO initiative involved a patent issue on plants and animals. The main issue is that there are genetic resources in seeds that have inherent value to public good especially in developing countries. Yet seed breeding companies such as Monsanto, patent seed varieties in order to charge royalties for their use. Once these seeds become patented, local farmers cannot use them for innovation. We put up roadblocks and worked with developing countries in order to protect plant variety, and accessibility to local farmers.

There have been several instances of Monsanto taking farmers to court for not paying royalties on specific types of seeds when their land became pollinated with patented seed types, despite the fact they did not intentionally plant the seed. The problem is that when farmers only have access to a small variety of crops, there is a major loss of biodiversity. We argued that if the WTO Intellectual Property Rights Agreement provided for patents on plants it would contravene the UN Convention on Biological Diversity to promote farmer’s rights to genetic resources in seeds. The Convention also provides for benefit sharing with farmers in developing countries the commercial value of high yielding varieties of seeds with the genes from their traditional varieties.

This work is reflected in the sustainable development goals developed by the United Nations that intend to transform the world by 2030.