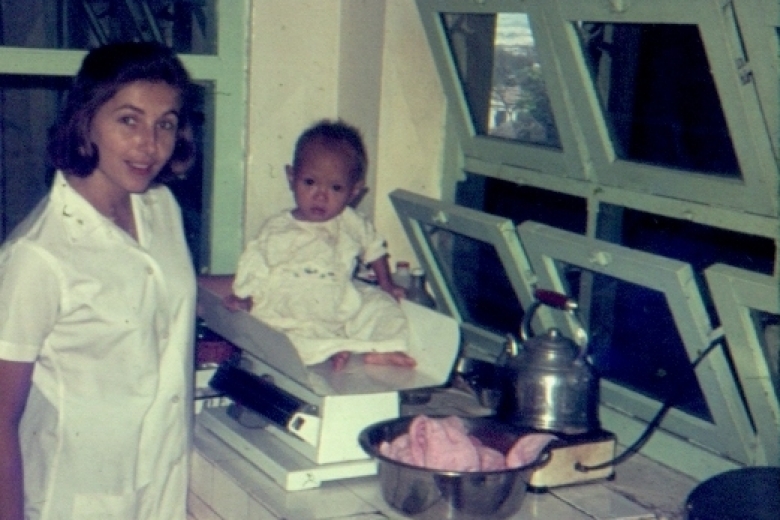 I was a Volunteer
Cathie Felter

I frequently say, that working with AFSC has been my heart work. I am an eternally grateful volunteer.

My first experience with the Service Committee was as an exchange student to England my junior year in high school in 1958 and I have continued to serve on various committees, including a period on the national board, until very recently – but I will focus on one experience I had in the 1960s that had a profound impact on my life.

I was working for AFSC in Cambridge in 1967 when I heard about a volunteer group that was being organized. The Visa Vietnam Group. This, of course, was during the Vietnam War, I was in my mid-20s, married with no children, and I felt I had to go to Vietnam to be with the Vietnamese people. It was a true leading – I simply had to go and AFSC was giving me the opportunity.

We ended up volunteering at the Children’s Hospital in Saigon. Specifically, I worked in the Kwashiorkor Room, or the ward for extremely malnourished orphans. I fed and bathed children who could not lift their own limbs. One little boy, two years of age, was so weak we had to prop him up in bed every day. He died while I was at the hospital because he choked on his own saliva.

The time was so dear. And sad. It was eye opening, how could we let these things happen?

In January, 1968 the Tet Offensive began and AFSC decided to evacuate our group from Vietnam because of safety concerns. But on the day that the Offensive began we had ridden our bikes to the Hospital and were working. It was not safe to go home so we spent the night at the hospital and we had the radio on in the evening. On the news it was announced that the Vietcong had fired on the hospital – but they had not – we had been at the hospital the entire time.

That was when I learned that you cannot blindly trust the news. You have to watch what you believe.

This, and other experiences with AFSC, helped me to see that the sun does not rise and fall on the United States. There are other people with other perspectives in the world.

For that experience, and for so many others with the American Friends Service Committee, I am eternally grateful.