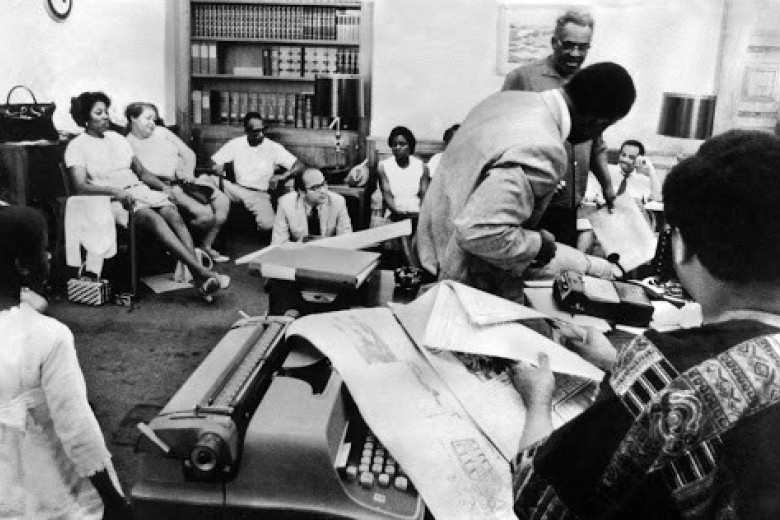 I was a Staff Member
Hayes Mizell

During the years 1966 to 1987, I lived in South Carolina and advocated various improvements in that state’s public schools. For most of these years I worked for the American Friends Service Committee (AFSC).

At first, my job was to monitor local communities’ implementation of Title VI of the 1964 Civil Rights Act, inform African-American citizens of their rights under that law, provide accurate information about federal guidelines for implementing the law, and generally advocate for speedy and effective desegregation of the public schools.

In this role, I did everything I could think of to advance school desegregation. The Columbia newspapers and I fell into almost a call and response. The papers would publish an editorial criticizing federal enforcement of school desegregation and I would, in turn, defend or explain it in a letter to the editor. If invited, I spoke to meetings of local NAACP branches or community improvement groups, often in African-American churches. The American Friends Service Committee arranged for my colleagues and me to appear before Congressional committees, and helped us prepare testimony. I published a statewide newsletter, Your Schools, that provided desegregation and education information that was otherwise unavailable, particularly to African-American citizens. Because a key strategy of the School Desegregation Task Force was to establish relationships with federal officials charged with enforcing the law, I also documented and shared with them and other national organizations information about local school officials’ efforts to frustrate the implementation of desegregation or abuses of citizens attempting to exercise their rights. As I worked more closely with local African-American activists seeking a greater voice in the education of their communities’ children, I helped them organize and secure funding for a small conference that some people perceived as the beginning of "black power” in the state. Over time, however, I began to look beyond the desegregation process itself to the quality of education that would be available to African-Americans once de jure segregation ended.

I saw the civil rights movement as the wedge to open the South for a more progressive and inclusive political system, but what impressed me more was how a small number of local African-American citizens responded to the movement. It created for them both the need and opportunity to demonstrate their intellect and leadership that the more privileged white community had long stifled. A notable example from South Carolina was Victoria DeLee.
I first met Mrs. DeLee in the offices of the South Carolina Voter Education Project. A resident of Ridgeville in Dorchester County, Mrs. DeLee had been raised in a share-cropping family, and from an early age she was concerned about social injustice in her rural community. In 1947 at the age of 22, her “entry into the civil rights movement resulted in large part from her desire to vent the anger she felt about racial oppression.” Mrs. DeLee was a tall, stocky woman who was physically intimidating, sharp-tongued and quick-witted. She used these assets in combination with great effect. Whenever she met someone who she thought might help her cause, she did not take “no” or “maybe” for an answer.

In 1964, Mrs. DeLee began to seek admission of her children to the formerly all-white schools of Dorchester County School District #3. In spite of being shot at and having her house burned, Mrs. DeLee was persistent in litigating, demonstrating, and advocating for school desegregation. By 1969, however, only 10 percent of African-American students were attending the formerly white schools in her community and no whites were attending African-American schools. Throughout Mrs. DeLee’s struggles, I tried to provide what small support I could, but it was never enough.

Soon after the 1968 election of Richard Nixon, there was increasing public speculation about whether and how the new President would repay Senator Strom Thurmond for neutralizing the third party threat of Governor George Wallace and marshalling Southern votes for Nixon. By the summer of 1969 press reports indicated that the Nixon administration was on the verge of revising the federal government’s administrative guidelines for enforcing Title VI of the 1964 Civil Rights Act. Southern political leaders and school officials had for years sought to subvert the effective application of these guidelines while my colleagues and I in the American Friends Service Committee had sought to strengthen them. We were frustrated with the pace of desegregation, and news reports that the Nixon administration might weaken the guidelines angered us even more.

In the middle of the week in late June 1969 I called my AFSC counterpart in Mississippi and suggested that we use our resources and organizing capacity to make it possible for local desegregation activists with whom we had been working to go to Washington, D.C. and tell their stories directly to Attorney General John Mitchell. On the following Sunday, our chartered bus left Jackson, Mississippi, with some AFSC staff and a few African-American parents who were among the first in Mississippi to seek a desegregated education for their children. During the next two days as the bus traveled through Alabama, Georgia, and South Carolina, it picked up more such parents, including Victoria DeLee.

At 9:00 o’clock on the morning of July 1, about 30 of us walked into office of Attorney General John Mitchell and asked to see him. When his receptionist told us he was testifying before Congress and that in any case we did not have an appointment, we said we would just wait until he was available. We sat in the few available chairs, as well as on the floor and on the receptionist’s desk. Throughout the day, Justice Department officials “cajoled, bribed, and threatened” us to get us to leave. But we did not leave. Instead, each of the African-American parents in our group told his story of his commitment to school desegregation and the sacrifices he had made, and suffered because of that commitment. Mrs. Bracey of Wetumpka, Alabama, told of her home being fired bombed when she enrolled her children in the previously all white school. Mrs. Young of Sylvester, Georgia, told of her teenage daughter being arrested and placed in the county detention home for several days for cursing a white student who had called her a “nigger.” Mr. West of Yazoo City, Mississippi, told of being fired several times when he put his child in the desegregated school each year for several years. And as he told his story, his voice trembling and hesitating, to an empty chair which we had labeled “Attorney General Mitchell,” Mr. West wept and tears were in the eyes of most of us in the room. There were many others participating in this intense emotional experience, but Assistant U.S. Attorney General for Civil Rights, Jerris Leonard could only interpret it as “unreasonable,” “unfair,” “hurting the work of this office.”
Indeed, as the day wore on and it became clear to Justice Department officials that we did not intend to leave until the parents spoke to the Attorney General, Jerris Leonard found himself in an impromptu debate with Mrs. DeLee. This was quite a sight. There was Leonard, a graduate of the Marquette University School of Law who had served for 12 years as a member of the Wisconsin State Legislature and had run unsuccessfully as the Republican nominee for the United States Senate from Wisconsin, going toe-to-toe with Victoria DeLee, a poorly educated woman from a share-cropping family in Ridgeville, South Carolina. Leonard realized too late that he had made the same mistake as every other person who had assumed that their education, position, class or experience would prevail in a confrontation with Mrs. DeLee; he was clearly in over his head. In frustration, Jerris Leonard suddenly turned and strode out of the room. But Mrs. DeLee was right behind him, wagging her forefinger at the back of his head and firing her final salvo, “...and you’re as phony as baloney!”
Fortunately, cooler heads at the Justice Department prevailed and just as police were assembling to arrest us, we were told that the Attorney General would meet with us. Mrs. DeLee was one of three members of our delegation permitted to speak to John Mitchell. But in the end we received only tepid assurances from the Attorney General that the Nixon administration would enforce desegregation laws. The next day, our small band of parents and AFSC staff retreated back across the Potomac, wiser about the ways the government really works.

This experience, and many that were less dramatic, had a profound effect on me. In Victoria DeLee and others I saw people who had the characteristics our nation says it values—intellect, determination, courage, faith—but who had been denied educational and social opportunities necessary to bring their talents fully to bear on behalf of their communities, their states, their nation, and, of course, their families. I saw people who others of privilege and power would consider “ordinary,” or less, but who had accomplished great things by force of will and extraordinary bravery. Though I was involved only at the periphery of the civil rights movement and late in its brief life, it set me on the road towards a career seeking to improve the schools that serve children who have the most to gain from effective education. Dismantling the South’s system of de jure schools was only the first step towards providing the educational opportunities necessary to develop and unleash the talents of future generations.