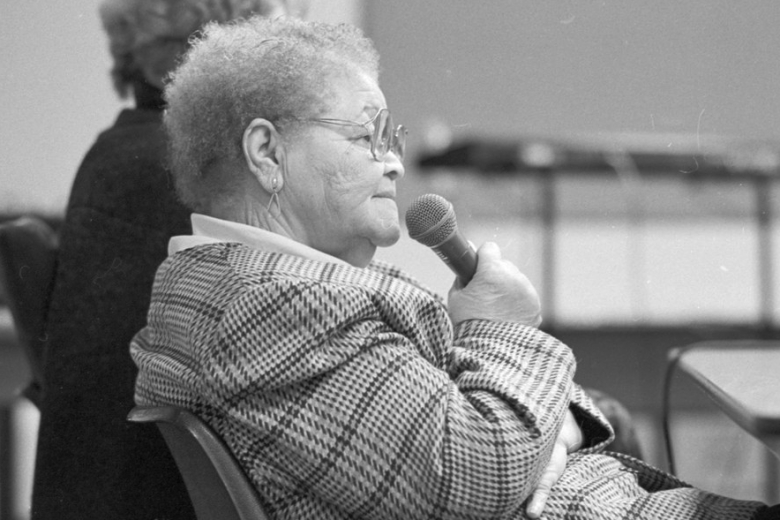 I was a Participant
Mae Bertha Carter

My name is Mae Bertha Carter and I was born in Sunflower County, Mississippi. I was born on the farm, the plantation, 69 years ago. They owned the farm where I was born. We didn't have schools for black people to go to at that time. They had to go to a church house for about two or three months in the year. At the church house, they had one teacher that would teach all grades and all subjects. I had to pick cotton when I was about six years old. I wasn't old enough to pull the sack behind me. You know when you pick cotton you got a sack come over your shoulder and then you pull about a hundred pounds. I wasn't old enough to pull this, so I had a 16-pound bucket. Sixteen pounds of lard came in this bucket, and when I picked cotton I emptied it into my mother's sack. So I didn't get an education.

I married a man who lived on the farm and we had 13 head of children. When my first little baby was born I looked at it and I said I want you to have an education. I don't want you out in the hot sun at 103 degrees, picking cotton for 14 hours-a-day. Then came the Freedom of Choice business in the '60s. We had been going to meetings and we would sing those songs, and when we got through singing those songs we felt so good we wanted to get out and march; so my children had gone to jail marching and protesting. Ruth went to jail and stayed five days; didn't have no food to eat. Hominy was all they had; nowhere to take a bath. Naomi stayed there for 11 days, cold grits. So the children was motivated when [the law said] they could go to any school they wanted to.

They wanted to go to the all-white school because they felt they could get a better education there. We knew they could get a better education there. The kids were so sick and tired of getting materials from this all-white school: all wore out books, half a piece of crayon, anything white children in Mississippi didn't want they passed down to the black children; old raggedy school books. Then they would go out and buy brand new school books for the white children.

So my children said yes, they wanted to go there. And I said, okay now, if you go there you are going to have to stay there because it's best not to start a thing and then stop. We was not stopping people.

When I walked into the superintendent's office and handed him the papers I noticed that he turned red. They weren't expecting anyone to do this. A couple of nights after that, about 3:00 in the morning—and we live way back on a dusty, gravel road, hardly any car ever comes back at that time—my husband looked out the window and said, "What is all those cars doing coming in here?" About then the shots came into the house. One of the shots came into the room where my daughter Ruth was sleeping.

They couldn't find who shot into the house. The government can go to the moon, but they can't find out who shot in my house. I know we didn't have $40 to our name, we didn't have no home, no land, and we had seven kids at home. My husband had to go up the next day to ask for some credit. The man at the store said, “You withdraw your children out of the school, and you have until 3:00 to do it, and then you can have credit.” That was the way it was—all the credit was cut off. We didn't know how we was going to live. But we did know we weren't going to let this man tell us where we could send our kids to school.

About five or six days after that two ladies came to our house. They'd heard about the problem but they hadn't heard about the shots into the house. They'd heard we had enrolled the kids. Some days later, one of the ladies wrote and said, some people will give you money one time and then no more. You need to have someone help you all along, and the next thing I knew I got a letter from the American Friends Service and the American Friends Service told me they had heard all about it so they sent some help.

My family and the AFSC worked together for ten years and we're still in touch.