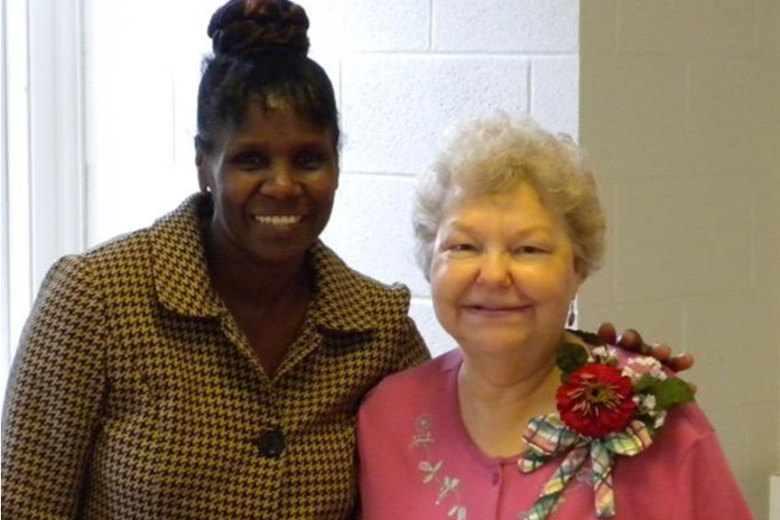 I was a Staff Member
Peggie Baxter

Peggie Baxter is a birthright Quaker, currently residing at Friends Homes Guilford in Greensboro, NC, who has been a pivotal player in the life of AFSC in North Carolina. Peggie initially started out her work career as a lab technician and also worked for a time with the Girl Scouts of America. However, the largest part of her working life was spent in association with the American Friends Service Committee (AFSC). When AFSC initially established a southeastern regional office, Peggie began working with them as their bookkeeper. Later on, as the AFSC program expanded, she became a part of the AFSC’s Material Aids Program. After the initial material aids program was laid down in 1980, Peggie was instrumental in helping to create a new program under the auspices of AFSC called Friends Emergency and Material Assistance Program (FEMAP) of which she was the director until her retirement.

Kit-making became one of the organization’s primary activities and the process often involved hundreds of volunteers. Hygiene kits were made to be given out after a disaster like the one in the Gulf coast, and some kits were given to prisoners or migrant workers in need of hygiene items. Baby kits were also made for needy families. The new FEMAP program also sought out more collaborative liaisons with local non-profit groups. For example, FEMAP collaborated with Duke Hospital to provide speciality kits for particularly needy patients while Duke Hospital provided a vehicle that could travel all over Wayne County distributing kits and provided medical assistance. FEMAP also continues to collect blankets which are given to the Red Cross Shelter for Women. The organization is still active today.

The material aids program and FEMAP have always maintained a good relationship with the surrounding community and because of this they have created a legacy of being an ongoing positive AFSC Quaker presence in North Carolina. The high esteem FEMAP is held in by the community promotes goodwill towards AFSC and Quakers, inspires donations of needed kit items, and attracts volunteers from the Quaker and local communities.

Peggie’s work with AFSC gave her much joy over the years, many good memories as well as untold hours of dedicated work. In retrospect, Peggie said that she feels programs such as FEMAP are visual reminders to the community of Quaker values being put into action, especially now at a time when Quaker values are less well known than they once were in the wider community.

Selected from an interview done by Bonnie Parsons, a volunteer at the Greensboro office.