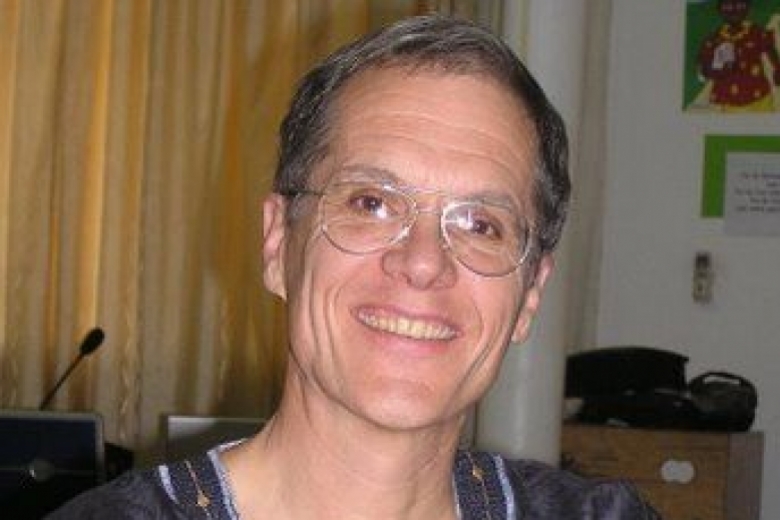 I was a Participant
David Blair

In 1980 AFSC and the Baptists co-led a Peace Tour to the Soviet Union. Russell Johnson was the AFSC leader. I went with Eric Wolfe, then the AFSC-NH director and a friend. We toured five cities – Moscow, Leningrad, Stalingrad, Kiev and Odessa – and met with the Peace Committees, (hardly) nongovernmental organizations, in each city. This was my first trip to the Soviet Union, and it happened in the same year that the US boycotted the Olympic Games in Moscow.

The immensity of the Soviet Union’s losses in World War II was impressed on us. It moved me deeply to visit the memorials and hear the stories of sacrifice. This was the strongest peace testimony possible.

I was fascinated to see some farming villages and took photos of farmers with horse carts. In a beautiful Kiev market, I photographed an older woman holding sunflowers for sale. An angry man then accosted me and demanded my film (which I did not surrender). He thought I took her portrait in order to show how backward the Soviet Union was. The horse carts and the woman with sunflowers were beautiful to me, but not to him. The Soviets were very sensitive about being compared unfavorably to the US or Western Europe.

When we spoke to one Peace Committee about the many wars our government has waged, and suggested there was a parallel to the recent Soviet invasion of Afghanistan, it was an older man from New York who leaped to his feet and upbraided us. “How dare you question our Soviet hosts in this way?” And so on. This was my introduction to a slice of American political life I’d never met before! I wouldn’t have been surprised to hear objections from our hosts, given my experience at the Tripartite work camp in 1969. However, it was shocking to hear our fellow traveler justifying everything that the USSR had done or ever could do.

In our free time, we made contact with Soviets eager to talk with us and show us around. I attended a soccer game in Kiev with Sasha and Ira and visited them in their apartment. We went to a disco together and talked late into the morning. When I found them again 25 years later, our bond was still strong.

That older man who took us to task got very sick on a plane trip to Moscow. Our group was met at the airport by our Intourist guide. She had to get the group to our hotel and to send him and his wife to a hospital by ambulance. As I was the only Russian speaker in our group, I went along in the ambulance; checked him into the Botkin Institute, a spotless and Spartan hospital with a very stern nurse presiding; then wandered out into the dark – it was past midnight - in a city I’d never visited before. I stuck out my thumb, a van pulled over, we negotiated a price and they drove me to my hotel! This was my Great Adventure. What an irony and what an opportunity to be of service to the man who’d lit into us for criticizing the Soviet Union. He got better and rejoined the group to tell us that he’d received the best medical care in the world. Of course!

When I returned home, I spoke to many groups about the importance of knowing the Soviets as people, and the folly of building more nuclear arms. I still hold to those convictions.