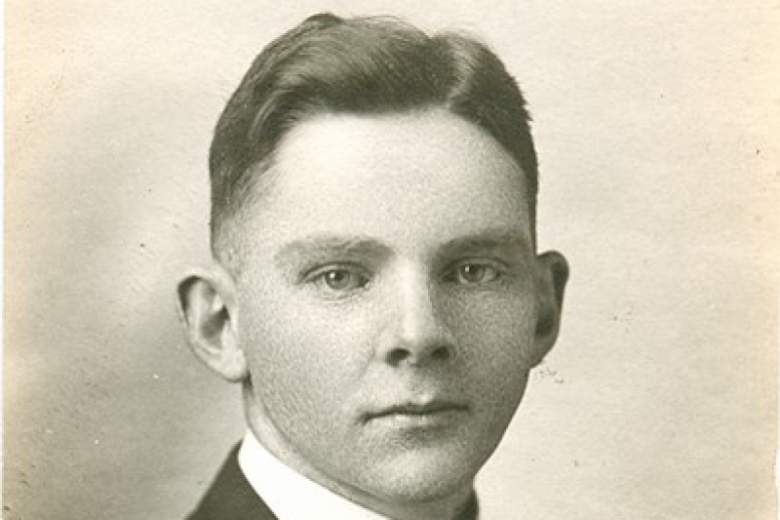 I was a Volunteer
Hurford Crosman

Shortly after the founding of the AFSC a call went out asking young Friends to volunteer for service overseas. Each of my father’s parents applied and both were accepted. Both were students at Earlham and took a year off as volunteers for the AFSC. In writing his thoughts almost 70 years later, grandfather wrote the following:

“I [can] relate my personal experience, the first half of which was manufacturing “Maision demontable’ (sections of houses to be assembled in the south of France) in Dole du Jura.

After the armistice I repaired six beat up old Army tractors and sent them with other C.O’s into various communities to plow land in order to get owners who had been driven out by the war back into the production of food. When the last one (a Case four cylinder) was running smoothly, I was sent with an English boy to Bethlainville, near Verdun.

None of the now returned owners knew who we were or why we were there. “To plow our land? Oh No! Americans come to take our land away from us?” My two high school years of French were put to a real test.

“We are here from Love. We are not the Americans you have met with during the war. We want no pay.”

But one young girl who had lost both her father and brothers, completely alone said she would take a chance. “Oh but you’ll be raped said the others” O.K. she will have to gamble.

So Jacoby plowed from daybreak until noon and then I plowed from Noon until I couldn’t see at dark. Land all plowed, now we will see what these young men really want. Nothing? Nothing but love, not the kind she expected.

From then on everybody wanted their land plowed. Later on another crew of Americans came with seeds, tools, clothing, etc. So the people of Bethlainville were restored to almost normal living.”

One of the stories that he never shared but we have subsequently learned about is that of his lost suitcase. After arriving in France but before beginning his work he took a train out of Paris. He checked his luggage, including all of his personal clothing. Somewhere along the way his checked baggage disappeared. There are letters in the AFSC archives several months later between his father in Portland, ME, and AFSC leadership arraigning for the shipment of replacement by ocean voyage to war ravaged France. What did he do for clothing in the meantime? We have no idea, but it never bothered him enough to talk about.