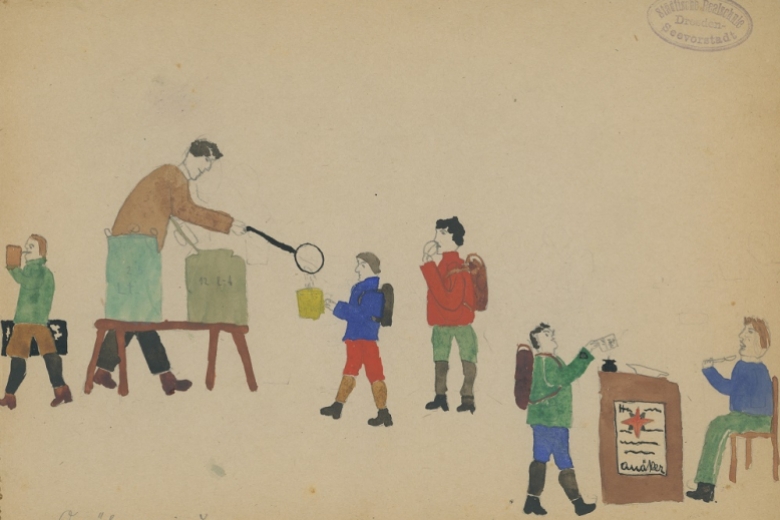 I was a Participant
Manfred Heinz Dietrich

Hungry students of Mathilde School - from the school's protocols.

Among the working class kids attending the Mathilde School in Offenbach founded in 1905, there was poverty and undernutrition even during peace times which was approached by service actions; in the protocols you find "Dec 23 1905: Christmas gifts for poor kids in the gym" and "Jul 4 1914: Start of summer holidays: Miss Thart leads the milk therapy".

During the war there was a school meal: "Jun 26 1916: in addition to the children receiving lunch in Offenbach's kid kitchens, an extra 50 are added from different classes." With the end of war, the subsequent revolution, reparation payments, and inflation the misery grew. There is no mention of a school meal.

It is not before May 31 1921 that the dean Mr. Born notes a piece of hope coming from beyond the Atlantic: "By the Society of Friends (Quaker) undernourished children in the whole of Germany are fed. For our school 110 kids are eligible. The children have to pay a small contribution (5 Mark) to cover administration costs. 99 children have paid, the others received the vouchers without charge." Due to family relations of one of the teachers additional direct contact to American donors became possible: "From April 28 1921 we were able for almost five weeks to deliver a warm breakfast to 40-50 kids each morning. By the help of Miss Perron and Miss Fröhlich we had received rice, cocoa, milk and flour from America. The food was cooked by Mrs. Penzel, distributed by teachers. In the following year, Mr. Claus and Mrs. Hiergesell paid a visit to the school:

Ceremony, speech of the dean, pictures of Offenbach as a gift to the donors, "the upper classes sang 'Ich bete an die Macht der Liebe' (I'm praying to the power of love), Mr. Claus donated five Dollars, quite something in the times of inflation. In the subsequent year, more food arrived from America for the Mathilde School, in addition money from the ones mentioned above, and a 'Quaker Collection'." The school used the money to purchase textiles and the sewing teachers worked. "80 children received a dress or a shirt." At the end of the school year 1923/24 the dean evaluates this love work and hopefully writes: "The mercy shall not be missed". What followed, however, was the most horrible period in the whole German history. For the Mathilde School, it ended with its re-naming on September 17 1945 - during Nazi time it was called Schemm School, named after the head of the Nazi teacher Association. The misery of children who often came into school in rags and without shoes, can hardly be described. On May 20, 1946 handing out Quaker meals for schools on the territory occupied by Americans was put into force. The demand was unimaginable and there were shortages: "Aug 6 1946 School meals are continued without bread. By measuring and weighing, the average size and the average weight of students has to be recorded to report it to occupation forces." There is a warning on September 21 1946 and a few times also later: "Nobody of the teachers may participate at school breakfast." On October 17 1946 school meals are terminated until December 1.
"School meals will recede. The sugar needed for that will come from Ireland. Thank you letters of students to the Irishmen are appreciated. Each day only half of students will be fed." Due to the Hoover Plan, it became possible in spring 1947 that most children in West Germany would receive one warm meal per day. At last on July 11 1947: "The food provided for school meals has to be checked by two teachers each day. Teachers may also eat." From around 1948, school meals are financed from German funds.

More and more people were sufficiently fed. In the Mathilde School, school meals are terminated in 1951 as suggested by the parental council."