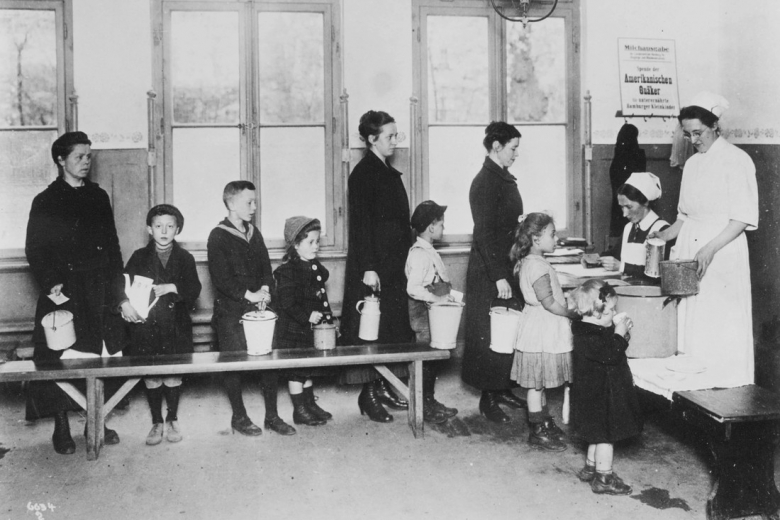 I was a Relative
Mariette Wickes

I’ve learned much about early workers of the American Friends Relief Commission who brought relief to victims of war throughout Europe in the early 20th century and feel a sense of kinship. My father was a relief worker in Belgium during the first world war with the Commission for Relief in Belgium, providing food for 11 million people under German occupation throughout World War I. He also served after the war in German relief as did the AFSC.

My father’s stories of his work in Belgium resonated throughout my childhood: I learned from him that work of service brings fulfillment, world awareness, romance and adventure too; his stories influenced my life’s decisions and that of my siblings.

Herbert Hoover led these operations, first in Belgium, then throughout Europe. He was a Quaker and briefly a Vice Chairman of the AFSC. He was known as the great humanitarian whose work touched millions of lives. My father, writing to his mother in July 1919 about the European relief called it “solely and entirely the work of one man, of Herbert Hoover, who less seen than the others is nevertheless the dominating figure in all Europe today.” He was echoing the loyalty typical of Hoover’s relief associates.

Hoover asked the AFSC to take on the relief work in Germany, where hundreds of thousands died of famine and disease in the years of war and its immediate aftermath. Even my Belgian mother, suffering under the hated occupation, expressed concern in her wartime diary for German civilians. She heard from Belgians returning from forced labor in Germany that women and children were scrounging for food scraps around their camps. “What must it be like in Germany when we think of all the help the poor people receive here, ”she wrote.

Unlike most Americans and British of that time, Quakers saw German civilians not as “enemy” but as people in desperate need. They’d already been engaged with German prisoners of war in France and with their destitute families. They accepted Hoover’s invitation, the organization he led providing the funds from governments and private contributions. In one imaginative campaign to raise awareness as well as funding, American donors received the same meal as the starving people of Europe at $1000 a plate.

Following the Belgian model, the AFSC in Germany focused on malnourished children. They were given a daily meal of cereals, legumes, bread, fat and a cup of cocoa with milk and sugar: they remembered it as “warmth and sweetness.”

“It was our task to maintain the laughter of the children, not to dry their tears," Hoover wrote in his memoirs “The experience of witnessing a wilted child restored to health and joyous chatter was itself an impelling reason for our continuation.”

At its peak, as many as one million German children were served each day by the AFSC in over 8000 feeding centers in communities throughout the country. 40,000 Germans were working with 1700 American and British Quakers in the program. A generation of children was able to regain health.

By 1922, German personnel assumed responsibility for the relief, freeing most of the Quakers for a new catastrophe: a massive famine in Russia. Yet, a Quaker presence remained in Germany even throughout the Nazi era.

In 1938 when persecution of the Jews became desperate, a committee of American Friends went to Berlin to assess what relief could be given. The committee was led by Rufus Jones, a founder and then still chairman of the AFSC. Nazi officials, remembering the Quaker food of the early 20’s. received them with respect. Quakers were allowed to continue their presence in Germany. They helped in the Kindertransport , in which 10,000 Jewish children were brought to safety in Britain with immigration restrictions waived. The AFSC was prepared to save 20,000 Jewish children, placing them in American homes but isolationist sentiment in the US kept them out.

Despite the AFSC’s vigorous campaign, neither Congress nor the President acted to open the doors to their immigration. Only 1400 Jewish children were able to find refuge in the U.S. throughout the holocaust.

Still, people throughout Europe share memories of earlier relief. Warmth and sweetness are not forgotten. Belgium still honors Hoover as its friend and benefactor. And when he was sent by President Truman to assess the relief needs of Europe after World War II, Communist officials said to him; it’s thanks to you that I’m alive. you fed me when I was a kid.

And I’m alive, thanks to my father who as a relief worker met and loved and married my Belgian mother, I’m part of the chorus of thanks for the massive relief in which so many have served, so many have been saved.