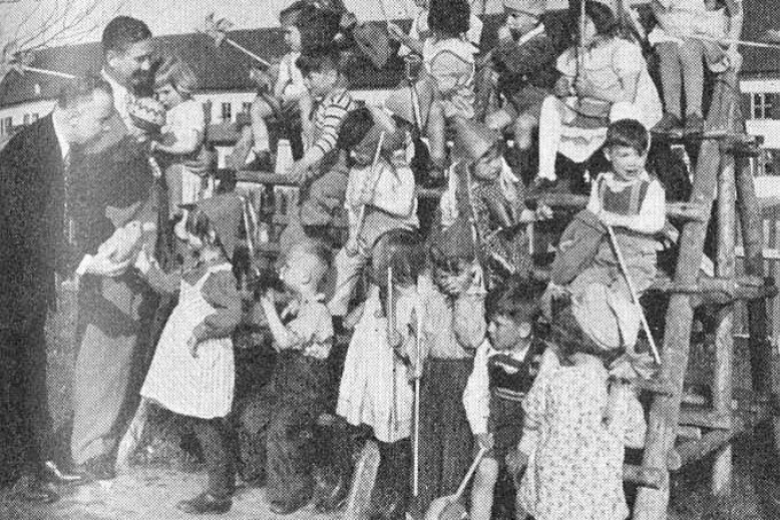 I was a Participant
Bohdan Kantor

My parents were Ukrainian forced laborers in Germany during WWII. Following the war, they moved through a series of camps for displaced people. I was born in one of the camps in 1947, the year the AFSC was a co-recipient of the Nobel Peace Prize, for "… silent help from the nameless to the nameless…”

In 1950, I moved to Bad Aibling Children’s Village nursery. American Friends Service Committee volunteers took a leading role in the operations. Six Quakers were living in the village, striving to bring stability into the life of a child. Kathleen Regan [Burgy] was the AFSC team leader. She and Jane Bennett, Robin Roberts [Powelson], Moira Douglas, and Orlow & Natalie Pierce Kent [Kempner] provided “home life” activities and living room atmosphere for the children.

I believe I learned English, table etiquette, and much more while conversing with them in this warm living room. Before Christmas, every bedroom had branches or a tree decorated with handmade ornaments. School children sang favorite English and German carols. We got to taste “exotic” bananas and oranges.

In 1951, we tested pinwheels donated by the American Legion. I am the kid second in line to receive a unique toy in addition to the pinwheel that I already possess. Also, notice I am attempting to master the American art of bubble gum blowing.

At Bad Aibling Children’s Village, under the care of Quakers with AFSC, I transformed from an undernourished, shy, sensitive child to an outgoing, inquisitive kid almost ready to immigrate to America. Towards the end of September 1951, my sister and I together with my father gained authorization to move to the resettlement center in Munich Funk-Kaserne for medical screening and final departure to the USA!

I was just one of many nameless child refugees before a volunteer peace army walked into my life wearing an assortment of muted colored uniforms and armbands. The Red Cross workers wore navy blue, UNRRA/IRO teams dressed in chocolate brown khaki, and the Quaker groups wore gray. The volunteers addressed each child by name and treated us as individuals. The love, care, and creative acts of a volunteer nourishing a child are precious beyond words and images. Today, refugee children in Ukraine continue to need our love and help.