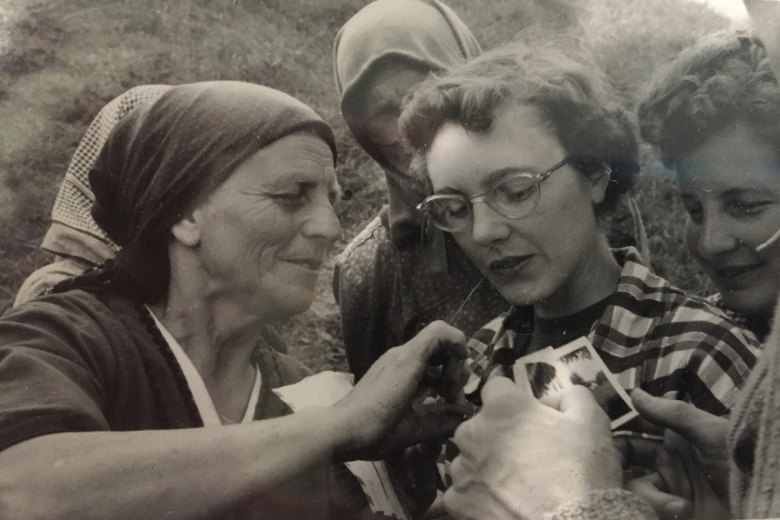 I was a Volunteer
Lois Sexton [Forbes]

I have been involved with the American Friends Service Committee for a lifetime. I still have the receipt and certificate from my first $10 donation in 1944.

I served on committees – I was involved in the highly contested move of the Middle Atlantic Region office from Philadelphia to Baltimore – and as a volunteer in many ways but there was about nine months that I spent in various work camps in Germany that were a defining time in my life. When I think about the AFSC I always think about my work camp experience.

The work camp participants were from everywhere. French, Scandinavian, German, American. We were building houses for displaced people – many of them German women who had lived their lives in Czechoslovakia but were forced to return to Germany under the Potsdam Agreement. It was a "sweat equity" project for the displaced Germans so they worked alongside us. The German men were noticeably absent, having been drafted or too old to work.

One of my closest friends was a young German girl. Her home had been destroyed during the war. Because of the conflict she was separated from her family, missed high school, and suffered in many ways. She had hated Americans, fiercely.

Eventually she ended up as a waitress in a US Army facility where a young soldier befriended her, taught her English, and helped her to learn the surprising fact that indeed, there were decent people everywhere in the world.

The work camps introduced me to many people like Hannah. Individuals who might have previously held one belief about people, only to have it turned over because of real life experiences.

In my second German work camp we were building housing for, and with, former German POWs. I had to have a hard conversation with a man who told me about bombers from the United States killing his daughter. My experience really tested me as a person.