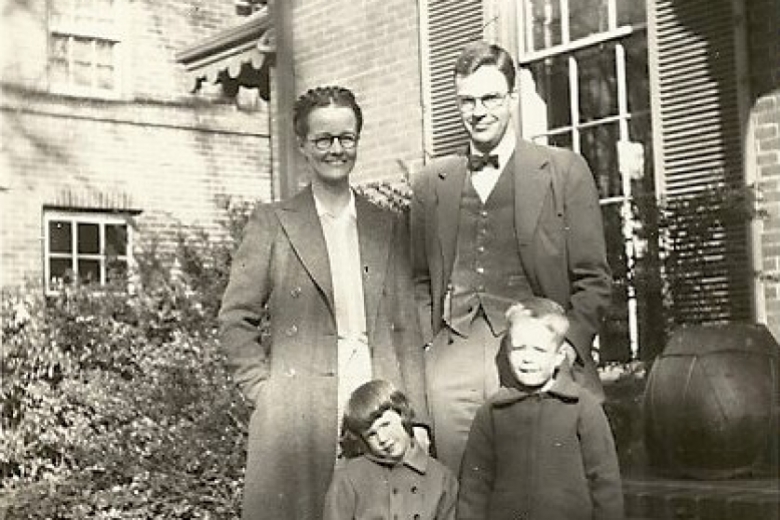 I was a Staff Member
H. Eastburn Thompson

I still remember the memorial service the American Friends Service Committee had in my father’s honor – I was five years old, and my sister was 3. My father went by the name Easie. He died a young man of 32 in a plane crash on his way to do relief work in Europe.

He joined the AFSC in 1944 under a deep sense of concern. He had been drafted, so his choice was between prison and the AFSC. He chose the AFSC and went about his work with complete honesty and devotion.

According to Stephen Cary, who headed the American Quaker relief operations in Europe for three years following World War II, as soon as the war was over, the AFSC was ready to send in relief teams to help meet urgent needs in Germany. But it was not possible because the four Allied powers had divided the country into four sectors and approvals to enter were slow.

The American military eventually insisted that an umbrella agency be established to serve as a clearing house and AFSC– and my father in his role as “expediter” for AFSC – played a major role in creating the organization. He guided the early relief work for the Cooperative for American Remittances to Europe (CARE), formed as a consortium of charities to deliver aid. Today, CARE continues as an international humanitarian agency delivering emergency relief and long-term international development projects so the legacy of AFSC and my father continue.

He took his work seriously, but also attended to it with humor and courage. He agreed to work with CARE, on loan from the Service Committee, even though the job was going to involve many hardships. I still remember my mother’s cry when she found out that the work he had loved had taken him away from us forever.